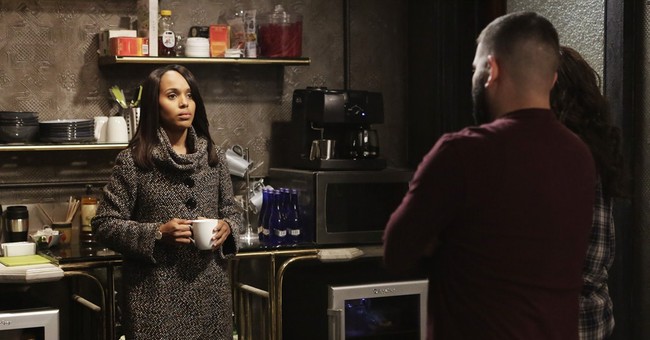 Some pro-abortion feminists recently denounced Hollywood for not producing TV and movie plots wherein the unborn baby is dispatched with zero remorse. It doesn't get more extremist than this. While Hollywood is without question virtually (but not entirely) unanimous in its pro-choice sentiments, even when the abortion option is selected, rarely is it selected without personal angst for the simple reason that there is angst -- unless you're devoid of a soul and a conscience.

That cry for saccharine pro-abortion propaganda was satisfied on Nov. 18 by ABC's Thursday night drama "Scandal." Not only did the central character, Olivia Pope, abort the baby conceived from her affair with the president of the United States, but had it performed while a gospel choir sang "Silent Night" over the scene. A song celebrating the birth of the baby Jesus couldn't be more deliberately inappropriate for an abortion scene, designed to deliver the greatest imaginable offense to Christianity.

We will say it: It is pure evil.

The other sound was a voice-over of Olivia's father in her head, denouncing family as "a pressure point, soft tissue, an illness, an antidote to greatness."

That matches nicely with the pro-abortion view of the "unwanted" child.

The final scene of this "winter finale" shows Olivia relishing a glass of wine and her Christmas tree while "Ave Maria" plays. The show's creator, Shonda Rhimes, surely knows how to mock God and the whole Nativity scene.

In addition to this plot, the president's ex-wife, now a Republican senator from Virginia, boldly filibusters for Planned Parenthood on the Senate floor, because the conservatives were going to make this spending "discretionary" instead of mandatory. That's a typically misleading Hollywood scenario. The makers of this bile know the abortion conglomerate's funding has always been discretionary and it is precisely because it discretionary that the pro-life community is urging Congress to use its discretion and stop funding Planned Parenthood's ghastly practices.

The senator lectures the pro-lifers: "You keep chipping away at their budget until, before you know it, Planned Parenthood no longer exists! So, as much as I would like to get home for the holidays, I refuse to do it at the expense of women's health."

If this hour-long Planned Parenthood ad seemed predictable from Rhimes, the unexpected came from "The Good Wife" on CBS.

Last spring, the show's creators Robert and Michelle King surprisingly allowed a likable, wealthy pro-life character to make dissenting arguments for the unborn on two shows. But what aired on Nov. 22 was an even deeper dive.

They borrowed from the real-life videos of the Center for Medical Progress and the legal battle in California, where the National Abortion Federation is fighting to prevent their videos from being shown publicly.

In this episode the liberal lawyer character Diane Lockhart first dismisses the damning videos as "shop talk" and "propaganda" by a "radical anti-abortion group." But when abortion advocates seek to censor the tapes, she decides to take on the fictionalized version of the CMP as a client to allow the tape to be seen.

She argues that the "pro-choice position isn't so weak that it can't stand up to the marketplace of ideas." But she finds great opposition from her liberal friends, who are appalled by the "insane" idea of letting the tapes be seen. One liberal friend asserts that "This isn't about censorship. This is about an orchestrated right-wing war on women."

So ABC makes a pro-abortion episode and CBS one that gives the edge to the pro-life position. The first is an offensive commercial favoring abortions and mocking not the Christmas story but Christ himself. The second displays a gripping debate between abortion fans and foes.

In Hollywood they consider that equitable. For the pro-abortion feminist radicals, it is unconscionable.