Unasked Questions in the LGBT Wars 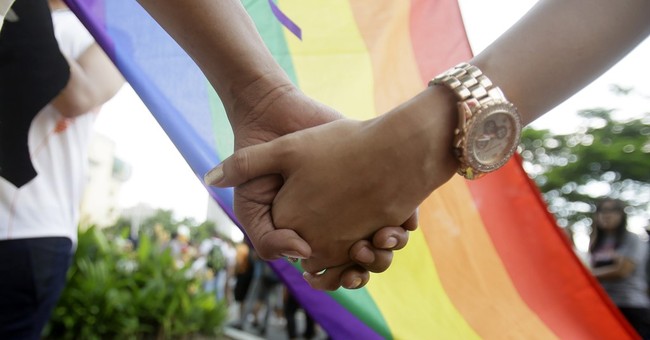 Trending
For decades now, the liberal "news" media have demonstrated a dramatic tilt toward the gay agenda, beginning with their notion that there is no such thing as a "gay agenda." But now, as the Supreme Court has mandated gay "marriage" in all 50 states, the liberal world is celebrating the agenda it has been pushing for decades.

Television coverage has been the usual appalling agitprop, but in this case it was also a victory lap. News segments have been either unanimous in their "analysis" or, if "balance" is presented, stacked by about 5-to-1. Simply put, a debate is not allowed, just as it is not allowed on global warming, gun rights, abortion and a host of other liberal imperatives. So much for free speech.

Former "Good Morning America" weatherman Sam Champion is a gay activist on-air and off, and he recently told CNN that this liberal bias is terrific. "I think TV always eases the path for change. I think what people watch in their homes, what they're comfortable with in their homes leads the way for acceptance in this country."

Champion and his champions are never, ever asked serious questions challenging their views. What kinds of questions are appropriate?

Enter Kevin DeYoung. DeYoung has taken to the Gospel Coalition website to pose over 40 questions to Christians who consider themselves supporters of gay "marriage." These are precisely the kinds of questions a disinterested press would ask if it were disinterested.

Gays have suggested -- and now aggressively insist -- that it's not "Christian" to oppose the gay agenda. The secular media know nothing about Christianity, or if they do, they don't really care to discuss it. Imagine them dropping these questions to a gay-left advocate:

"How would you make a positive case from Scripture that sexual activity between two persons of the same sex is a blessing to be celebrated?"

Or: "Do you think Jesus would have been okay with homosexual behavior between consenting adults in a committed relationship? If so, why did he reassert the Genesis definition of marriage as being one man and one woman?"

Then there's the fidelity question: "Is it a sin for LGBT persons to engage in sexual activity outside of marriage?" Gay rabble-rouser Dan Savage insists monogamy is for suckers. Why is he wrong?

DeYoung poses questions about the politics of this issue. Wouldn't it be fascinating if one, just one, reporter would ask: "Do you think Hillary Clinton and Barack Obama were motivated by personal animus and bigotry when they, for almost all of their lives, defined marriage as a covenant relationship between one man and one woman?"

Or: "Do you think children do best with a mother and a father? If not, what research would you point to in support of that conclusion?"

Liberals have long mocked the idea that favoring the gay agenda would lead naturally and inevitably to going soft on polygamy, incest and other sexual "liberations." So why not ask these questions:

"Should marriage be limited to only two people?"

"On what basis, if any, would you prevent consenting adults of any relation and of any number from getting married? Do you think close family members should be allowed to get married?"

"Should there be an age requirement in this country for obtaining a marriage license?"

One way this sexual revolution advances is by never having to explain itself, and never looking "fringy" to our media elites, even as they advance the fringes into the new mainstream.