Hillary and Her Roped Media Herd 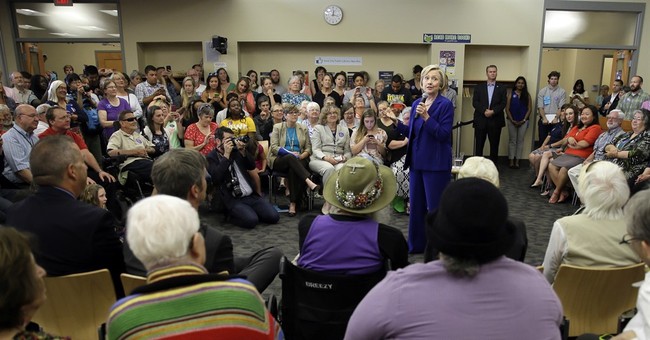 Editor's Note: This column was coauthored by Tim Graham.

Hillary Clinton's campaign again signaled its contempt for the press during a July 4 parade in New Hampshire. Aides brought out ropes to cordon off the media. It was the perfect metaphor for a "news" media so cowered by their candidate that they would allow such a humiliating action.

The images lit up Twitter on the holiday, but their reaction -- or lack thereof -- tells you all you need to know about their journalistic pride.

The Clinton campaign treated this as a joke. Spokesman Nick Merrill issued a statement: "While the GOP may want to spin a good yarn on this, let's not get tied up in knots."

Was he adding insult to injury? New York Times reporter Maggie Haberman was a notable complainer on Twitter, but the rope trick was buried in paragraph 10 of her story on Hillary's campaign stop. The Washington Post buried one mention in print. USA Today offered nothing. PBS had nothing. NPR had one sentence from Cokie Roberts. The AP had one throwaway line that the candidate was "separated by a long rope from the pack of journalists that followed."

Networks that noticed this insult thought the "optics" were bad, but they still led with their liberal empathy. Chuck Todd said he was "sympathetic" to her concerns about what he called the "media horde." NBC's Kelly O'Donnell explained "the rope made it easier for Clinton to be seen by voters and her supporters."

Since she entered the national limelight in 1992, Hillary has enjoyed the sort of fawning and extremely deferential treatment any politician would sell his mother to achieve. So why her hostility to the press? Either Hillary has an extreme sense of entitlement, a deep paranoia, or both. She is Marie Antoinette. Saying she treats the press as entirely optional and mostly undesirable is putting it mildly. She treats them like dirt.

Three summers ago, campaign reporters ran after Mitt Romney in Poland screaming, "What about your gaffes?" and "Do you feel your gaffes overshadowed your foreign trip?" What had gone so terribly wrong?

An aide snapped at the press to "show some respect" at Poland's tomb of the unknown soldier and cursed. CNN reporter Jim Acosta was angry about the press's prerogatives. "It's really no surprise really, that the press tried their best to get a question to him today," he argued, and "I think it should also be noted that this press aide, and what he said to us, was really inexcusable." He concluded, "To have an event and to expect the media not to ask you questions is sort of unrealistic."

Unless you're Hillary Clinton.

Now the Clinton campaign announced their candidate will consent to an interview with CNN correspondent Brianna Keilar. Another image from Twitter quickly made waves. Keilar and a bunch of other "objective" reporters trailing the Clinton campaign were pictured partying at a wedding for Clinton aide Adam Parkhomenko and his new bride Kirby Hoag, a former staffer of the Ready for Hillary PAC.

There's not even a hint of impropriety, according to the press. Journalists are allergic to wearing flag pins and refuse to say the Pledge of Allegiance because they prize their independence. So why would they compromise their independence this way? They might think celebrating with Clinton aides will give them greater access -- and if so, it appears that Keilar's gambit to attend this wedding was successful.

When will the media relocate, if not their independence, at least their self-respect?