The Media, the Court and the Slippery Sex Slope 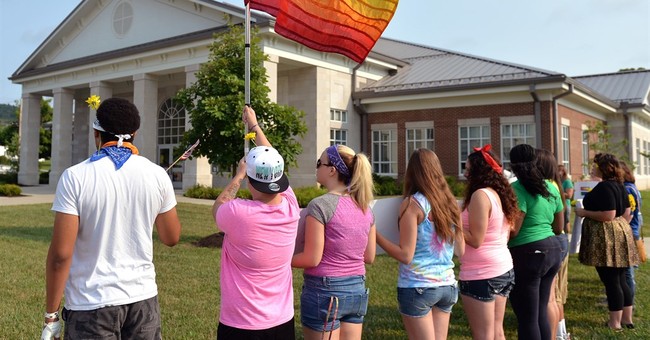 Back in 2003, the Associated Press gave serious aid and comfort to a vicious campaign against Sen. Rick Santorum over an interview he granted them dealing with the gay rights issue.

Santorum's point was philosophical: Where is a line drawn on sexual consent? Is there a line at all? And when you seek to erase any line, what does this do to society?

Friday's gay marriage mandate is merely the latest "landmark" decision on the slippery slope toward obliterating any definition of consensual deviancy. We haven't defined deviancy down. We've shredded it.

Santorum was made to look like a conspiracy nut, or just a fool in 2003. But within hours of the terrible new Supreme Court decision, Politico had posted an op-ed plainly titled "It's Time to Legalize Polygamy."

So where is the line to be drawn? Here's the awful truth: The left wants no lines. If you doubt us, show us the line -- as they have drawn.

Our "progressive" media never ask where a line should be drawn. President Obama routinely offers this formulation, as he did in May, to "underscore that all people deserve to live free from fear, violence, and discrimination, regardless of who they are or whom they love."

Applying the Santorum quote, Obama's very inclusive definition of "love" could include bigamy, polygamy, incest and adultery. It draws no line about an age of consent. It doesn't even draw a line about "loving" animals. Can anyone find one instance where any journalist or interviewer has ever asked the president or any powerful liberal about where a line should be drawn?

Now, it's social conservatives who have become the focus of "fear, violence, and discrimination" for maintaining their deeply held religious views that homosexuality is a sin and that "gay marriage" is an act of cultural deconstruction. We've already seen the first signs of businesses punished for failing to participate in gay marriage ceremonies, with six-figure fines and barrels of negative publicity.

The obvious next step is forcing churches to participate in gay marriages, and if they refuse, it will be time to revoke their tax exemptions. Shortly after the latest court decision, Time posted an online commentary advocating the end of all tax benefits for religious organizations. Naturally, it will follow that churches and religious groups will also be forced to employ people who in no way share their religious beliefs.

Justice Anthony Kennedy claimed in his majority opinion that "The First Amendment ensures that religious organizations and persons are given proper protection as they seek to teach the principles that are so fulfilling and so central to their lives and faiths." But if the Democrats win the White House again, it's obvious they will appoint more liberal justices that share their obvious devotion to steamrolling "religious freedom" -- which they now routinely put in scare quotes.

For decades the media have tilted dramatically in favor of gay lobbies. They have won. What next? No one expects the media elites to tap any brakes as America heads over the cliff.