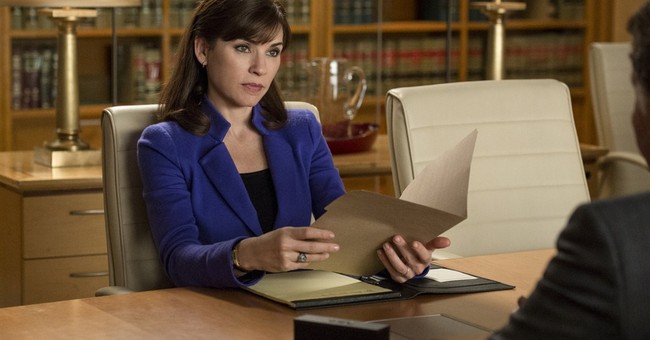 This seemed to describe "The Good Wife" on CBS over the past five years. But something interesting has happened over the past few weeks. Producers have introduced a wealthy conservative character named Reese Dipple, who engages seasoned liberal lawyer Diane Lockhart on the hot-button social issues of the day.

As they say on cable TV, you won't believe what happens next.

This debate began because Lockhart would like to attract Dipple, the "fourth richest man in America," as a client, despite their political differences.

On the March 22 episode, she arranged to run into him at a hunting lodge in Wyoming. Out in the woods, sitting in the snow, they chatted about abortion. She led with the vision of women dead from backstreet abortions.

"So what?" the feminist replied. "Abortion is murder?"

He gently continued: "Don't look away from the aborted fetus. Look at it. Why is it not a baby? And why are we kitsch-ifying these babies, and turning 'em into these cute little Raphael cherubs, and at the same time we're aborting 1.2 million of them a year?"

It's beyond amazing that a character on prime-time TV is preaching a pro-life message, complete with statistics, and isn't made to look like Satan incarnate. This conservative character generously debates his liberal friend, telling her he's pro-life because he likes people, and he likes her, and wonders out loud whether an aborted fetus could turn out like her, or like him.

Kudos to "The Good Wife" creators Robert and Michelle King for avoiding stick-figure debates designed not only to make conservatives lose, but also look terrible in the process. Robert King told Entertainment Weekly magazine that they have a diverse writing staff, both politically and religiously. That seems accurate when you watch these debates.

On April 5, the subject was the battle over religious-freedom protections for bakers and wedding planners who object to same-sex weddings based on their faith. Dipple wanted to donate to support Christians who were fighting for their rights. Lockhart advised him that wouldn't work in California with its laws, and so Dipple funded a battle for a wedding planner in Idaho with better chances. He used Lockhart as a liberal counsel in mock trials to see how it would work.

Again, "The Good Wife" writers allowed their Dipple character to project sound conservative arguments on CBS: "Three years ago, Barack Obama was against gay marriage. So was Bill Clinton, so was Hillary. Basically, every Democratic icon was lined up against gay marriage," he began. "Now they're not. Because it's politically expedient for them not to be. Who knows what they're gonna be for or against in another three years, right?"