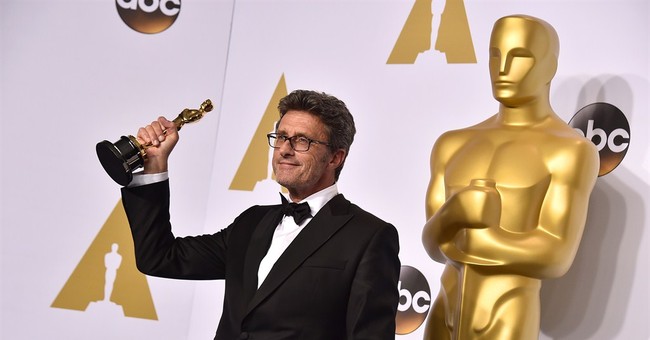 The media noticed that this year's Oscars ceremony contained a lot of political tub-thumping, but they didn't notice that these speeches were predictable and obnoxious left-wing screeds.

They were just "passionate pleas for equality," according to the Associated Press. Actress Patricia Arquette unleashed a tirade on wage inequality for women. Singer John Legend said more black men were trapped in prison than America had black men trapped in slavery in 1850. There's apparently no difference between Kunta Kinte and Willie Horton.

On CNN, Entertainment Weekly writer Anthony Breznican represented the media fog on this one: "I can't really think of anything last night that was actually liberal." He wanted to pretend these were just compassion issues, not ideological issues. When anchor Don Lemon retorted that "conservatives often complain about the issues and about these types of shows being issue-oriented," Breznican responded, "that's because they don't like to be bothered by these issues. They ... would rather not be confronted by them."

That kind of silliness explains why no one takes CNN seriously these days. Conservatives love a good "issue" discussion. They just don't like it in the middle of the Oscars or the Super Bowl. Most liberals don't either. Can't we just enjoy a big TV event without being lectured?

Let's consider a few reasons why political Oscar speeches are annoying to most Americans.

1. They're out of place in an acceptance speech. When ABC's Oscar telecast drones on for four hours, there's no time to mount a soapbox and yammer about politics. Say your thank-you's, and get off stage.

It's slightly less annoying when there's a special award where the recipient is expected to speak longer than the allotted 45 seconds. It's ridiculous when the politicking comes from non-winners. Recall the infamous 1993 incident with leftist actors Susan Sarandon and Tim Robbins who started lecturing about Haiti ... as award presenters!

2. They're pompous and self-congratulatory. One of the most historic stunts was Marlon Brando sending Indian actress-activist Sacheen Littlefeather to refuse his Oscar in 1973 and denounce liberal Hollywood for mistreating the Indians. You won't win a popularity contest with that kind of tactic.

3. These actors didn't earn Ph.D.s in political science. Great actors, singers, directors and screenwriters may excel at what they do for a living, but few, very few, are experts on public policy. They sound like amateurs who want to win an argument just by emotional exploitation. "Why do you people hate women so much?"

4. They reek of limousine liberalism. When Patricia Arquette unloaded this year about wage equality for women, the biggest cheerleader on the TV screen was Meryl Streep. Arquette's net worth is estimated at $24 million, Streep's at $65 million. They aren't exactly living in a trailer park.

The people who hated "You lie" at an Obama State of the Union speech never saw this as heckling. But it's the same message on a different stage.

We can't expect the Hollywood left to knock off the Oscar sermonizing. But they certainly can't expect America to like it.