A Year of Anti-Religious Bigotry 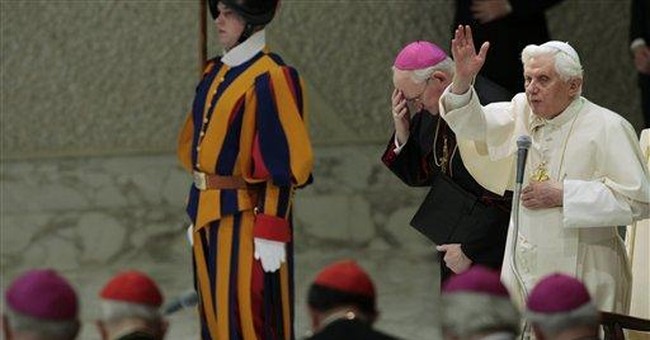 It's quite striking to see the degree to which traditional Islam has come under ferocious attack from the anti-religious impulse in Hollywood and New York and other bohemian centers in America. It is clearly anti-Islamic religious bigotry. Take a look at just some examples over the past year alone.

January: The Source Weekly, a weekly arts publication in Bend, Ore., featured on its cover an image of Mohammad holding a child with President Obama's head crudely posted on its body. Muslim protests were greeted with this dismissive response: "What is printed is printed, and we will not apologize."

Feb. 12: The NBC sitcom "30 Rock" poked fun at Muslims when Alec Baldwin's character attempted to ingratiate himself with his beautiful Muslim girlfriend by fraudulently going through the motions at her mosque.

Feb. 16: The Fox drama series "House" concentrated a plot on an imam who had privately lost his faith in Islam, while publicly being suspected of having AIDS. In other words, he was a religious hypocrite, a heavy drinker who was accused of being a pedophile and who declared he "hate(d) his job." Ultimately, the doctors would find he was free of AIDS and he would rediscover his faith, but not until after all the negative stereotypes had gleefully marched through the episode.

April 4: On The Washington Post blog site "On Faith," atheist Susan Jacoby insisted Muslim leaders should burn in hell for adhering to their Islamic views on abortion: "Religious 'authorities' ought to burn in hell, if there were a hell, for hypocritical apologies composed of words rather than deeds. There could surely be no better place for leaders who believe in forcing a nine-year-old to bear the children of her rapist."

April 13: In the weekly gay Hotspots magazine, an ad appeared promoting a gay club in West Palm Beach, Fla. The ad was clearly, unequivocally designed to insult Muslims. The ad depicted a DJ dressed as Mohammad ascending to Heaven -- with an erection under his robe. Beneath him were several followers making crude comments about his anatomy on the order of "I've seen bigger."

Oct. 18: The annual Halloween special on "The Simpsons" inflamed the Islamic community with a zombie plot. When most of Springfield turned into zombies after eating tainted red meat, Bart Simpson spit out tainted hamburger before he could be transformed, and was hailed as "Mohammad the Prophet."

Oct. 23: The film "Eulogy for a Vampire" opened in New York. The New York Times described the movie's mix of religious imagery, whippings and animal blood surrounding a plot of an all-male Sufi Muslim order "whose members seem to spend no time in spiritual reflection but quite a lot of time groping one another."

Oct. 25: On HBO's "Curb Your Enthusiasm," actor and show creator Larry David used a bathroom in a Muslim home to upset his friends by not only urinating while standing, which Muslims find religiously impure, but also urinating all over the walls, including a picture of Mohammad. David compounded the offense by talking incessantly while using the bathroom, which is also offensive. David seemed to take glee in offending Islamic audiences.

Nov. 12: While discussing Islam on the primetime "Jay Leno Show," Leno ridiculed Muslims for their faith. He said, "Apparently, they ran out of places to send suicide bombers, so they are looking to outer space."

Dec. 7: In a profanity-laced bit on his HBO special "Weapons of Self Destruction," Robin Williams referred to Mohammad as a "Nazi."

On and on it goes, and by now, perhaps you've already surmised: None of the foregoing was true. Hollywood would never dare ridicule Islam this way. The same holds true for every other appendage of the cultural left.

In each case, scratch the Muslim reference and replace it (with a few modifications) with the Catholic Church, with its priests and monks, with Pope Benedict XVI, and with Jesus and Mary. All of these incidents were cited in the Catholic League's "2009 Report on Anti-Catholicism," but they only scratch the surface. There are 68 grisly pages of examples.

Catholicism is the single largest religious denomination in America. In our news and entertainment media today, anti-Catholicism remains "the last acceptable prejudice." It is not that the cultural left is out of touch. It is out to destroy.