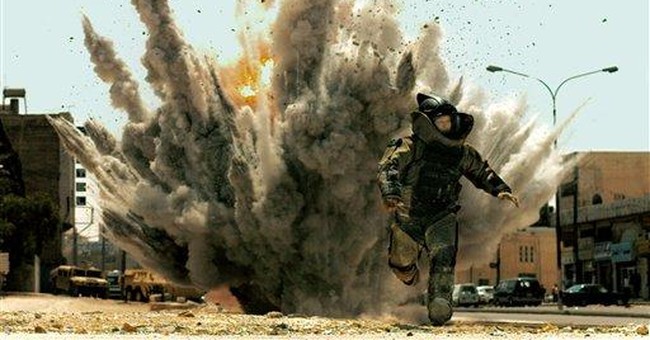 There have been a couple of constants where Iraq War cinematography is concerned. One, movie makers ignore the public appetite for movies supporting the anti-terror war message in favor of drab, depressing, preachy antiwar politicking featuring marquee names and little else. Two, those movies, which predictably bomb at the box office, are the rage of the film critics who levitate in ecstasy at the opportunity to praise that which trashes Bush, the war on terror (set ital) and (end ital) the military all at once.

So how to explain "The Hurt Locker" and the critical rapture that surrounds it?

Here's a new offering that has none of the political messaging of Hollywood, doesn't contain a single marquee name, and the critics are cheering.

New York Times tastemaker A.O. Scott bluntly proclaimed, "The best nondocumentary American feature made yet about the war in Iraq." Joe Morgenstern of the Wall Street Journal also raved: "A first?rate action thriller, a vivid evocation of urban warfare in Iraq, a penetrating study of heroism and a showcase for austere technique, terse writing and a trio of brilliant performances."

The plot is disarmingly simple, if I can use that pun. The film follows a team of U.S. Army technicians in Baghdad disarming improvised explosive devices, or IEDs. The audience shares the unnerving tension, even paranoia of the soldiers, feeling the prospect of death lurking around every corner, hidden behind every wall, and in the slightest of movements of every Iraqi stranger.

Morgenstern is not kidding about "austere technique." This has to be the quietest war movie ever made, and it's a quiet movie about … bombs? Outside of a few breaks of inside-the-movie music (rock music from boomboxes or video games), there is no mood-establishing music until the 1-hour, 2-minute mark -- a sensual eternity. Director Kathryn Bigelow never provides the viewer with the audio cues warning of impending crisis, leaving the viewer conditioned to expect disaster constantly. There is no Dolby-Stereo wizardry or enormous special-effects monsters in "The Hurt Locker." This film operates on a maddeningly vulnerable, heart-pounding human scale.

This is not a pro-war movie; it is a movie about war, period. It is certainly the first Iraq War movie that drains all of the political rhetoric out, offering instead just the microcosm of American troops in a theatre where terrorists really are blowing people up with a quick dial on their cell phones.

Some leftist critics have found that lack of politicking to be political. Tara McKelvey of the American Prospect complained that the movie was "propaganda," an "effective recruiting tool" for the Army. Yet McKelvey can't even seem to convince herself. In another passage, she stated the movie "shows the paranoia, rage, and brutal recklessness of soldiers trapped in the downward death spiral of the Iraq war."

The soldiers here are not bigoted monsters. In New York magazine, critic David Edelstein suggested, "'The Hurt Locker' might be the first Iraq?set film to break through to a mass audience because it doesn't lead with the paralysis of the guilt?ridden Yank."

The central character of the movie, Staff Sgt. Will James, is not guilt-ridden, but he's also not your standard G.I. Joe action hero. The soldiers under his command are so unnerved at his reckless bomb-disabling antics that they briefly consider taking him out with friendly fire to keep him from getting them killed.

Ice seems to flow through Will's veins as he takes apart bombs that could blow up a city block. And yet when he returns home to his wife and infant son, he's clearly unnerved by the tedium of rolling through a supermarket deciding which cereal to buy, as the syrupy sounds of Muzak suggest a stark contrast with the exploding ordinance of a war zone. While his squad dreams of going home in one piece, he's clearly much happier hovering over a bomb fuse. There is no dramatic "Top Gun" hero ending, where he's applauded by a cast of hundreds. In the end he's as conflicted as when he was first introduced.

Some Iraq veterans have complained the movie isn't militarily realistic about what Army bomb squads actually do, but that reminds us of the D-Day vets who said the opening act of "Saving Private Ryan" wasn't realistic enough. The viewer certainly feels he is trudging along with the troops on very perilous ground.

It's a good movie to see, if only to remember the next time you come across a veteran deserving a nation's gratitude.