Country Music: Too Much Freedom Loving? 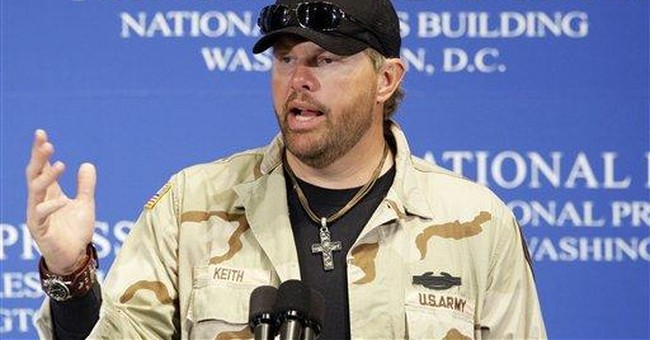 In these hard times, Americans are trying hard to relax and take refuge in entertainment. But The Washington Post is insisting that country music fans are not really sympathetic figures. They are prone to self-congratulation and "closing ranks" behind the thought that they live in the "real America."

The Post music critic going by the name Josh Freedom du Lac -- that just can't be his name -- doesn't really seem to like patriotic music, despite the patriotic byline. He worries that songs like Jason Aldean's "Hicktown" or the Zac Brown Band's "Chicken Fried" do something wrong: They are "narrowcasting to a specific community: the core country audience, whose roots aren't exactly in America's urban centers."

That claim in itself sounds silly. Aren't people who make rap music or big-band music or polka music "narrowcasting"? Maybe du Lac just doesn't like this particular niche audience. He doesn't like the message that's offered, either. "The symbolism and prideful sentiments of the songs are intended to create a sense of belonging among people with similar backgrounds and lifestyles, or at least people who romanticize life in the rural South," he wrote. "To some listeners, though, it might sound as if the artists are closing ranks."

Then he arranged an expert to echo his theme: "Some of these songs seem to fall into the 'we're from Real America, and you're not' camp," said Peter Cooper, who covers country music for Nashville's daily newspaper, the Tennessean. "Seems like being divisive while the industry around you crumbles is a poor decision."

At this point, the country music fan has a question: Is a newspaper writer from Nashville possibly making an unwise decision to deride his hometown industry while the newspaper business crumbles around him?

Where, oh, where, is the controversy in country music fans loving their country? Offended urbanistas (like big-city newspaper writers) never seem to ask whether they can be accused of their own superiority complex about how much smarter and more sophisticated they are than those ignorant rural rednecks.

Is divisive anger what these country musicians are selling? Take a quick look at lyrics from the Zac Brown Band song singled out by the Washington Post: "I thank God for my life/ For the stars and stripes/ May freedom forever fly, let it ring./ Salute the ones who died/ And the ones that gave their lives/ So we don't have to sacrifice/ All the things we love." Those things include fried chicken and beer and blue jeans.

Where, exactly, is a call to "closing ranks" in those lyrics? Is embracing freedom and the American military a form of "narrowcasting"? The only ones who could possibly be uncomfortable or feel excluded are those who don't embrace freedom.

So what does Freedom du Lac embrace? His "Best of 2006" list of musical favorites included a different kind of Southern vibe from the Virginia-based rap group Clipse: "The Virginia Beach brothers Pusha T and Malice make morally bankrupt music -- stark, punishing rap songs about selling cocaine." How on earth does that appeal to a broad audience?

His "Best of 2006" list was topped by the Bush-bashing Dixie Chicks, whose "Not Ready to Make Nice" was hailed as "one of the great singles" of the year. The song demonized people who supported a war on terror: "It's a sad, sad story when a mother will teach her daughter that she ought to hate a perfect stranger." Dixie Chick critics were cartooned as people who write letters "Sayin' that I better shut up and sing, or my life will be over." Don't look now, but someone is "romanticizing" their own viewpoint and "closing ranks" with people who aren't "haters."

But that song is a picnic of patriotism compared to another du Lac "Best of 2006" pick -- a disc by a rap group called The Coup, titled "Pick a Bigger Weapon." He hailed the musical genius of their leader, Boots Riley: "He hurls poetic Molotov cocktails at the usual suspects (capitalist pigs, President Bush, the CIA); but he also spikes this Marxist manifesto with lusty lyrics." Boots Riley has referred to this country as the "United Snakes," and believes that "the American flag … stands for oppression, slavery and murder."

So praise the freedom America offers, and Josh Freedom du Lac will curse you; write Marxist manifestos against the "United Snakes," and he will praise you as the best. Someone needs to drop the word "Freedom" from his name.

Something tells me he won't be attending Sean Hannity's Freedom Concerts this summer.