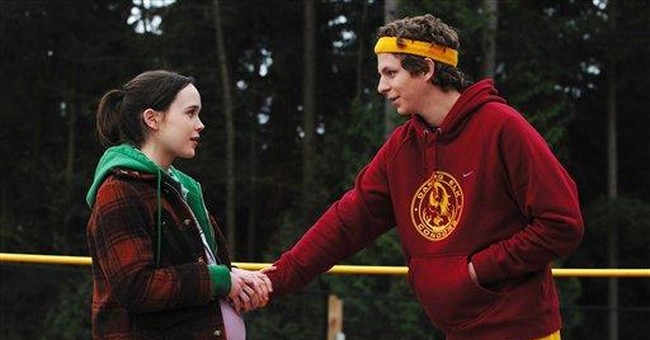 Teenagers who tumble from the bed to a sudden pregnancy often face this reaction from the people surrounding them: These poor kids made a mistake, yes. But they don't have the maturity to bring a life into the world. It would ruin their lives, and they probably would be irresponsible and resentful parents. Admitting their immaturity and having an abortion is the truly mature choice.

That might sound like a formulaic TV movie of the week. But then comes "Juno," the quirky, arty film with a completely different take -- and it's taking the movie world by storm.

For a "little" film from Fox Searchlight Pictures without any real bankable stars in it, it's a hit, grossing $85 million in its first seven weeks. It also has become the unexpected belle of the Oscar ball, drawing nominations for Best Picture, Best Director, Best Original Screenplay and Best Actress for Ellen Page, who plays the teenage title character. Given that the academy has nominated a whole field of darker, less commercial movies for Best Picture, "Juno" strangely has evolved almost into the feel-good blockbuster of the bunch.

Detractors might argue the film's too cute. It's implausible that Juno would get pregnant after her first sexual encounter. Is she just a wisecracking teen too smart to be real? She calls the abortion clinic and says, "Uh, yes, I'm just calling to schedule a hasty abortion." But upon arriving at the abortion clinic, you see more depth emerge. A nerdy, protesting classmate Juno knows shocks her by telling her that her baby already has fingernails. After Juno enters the clinic and converses with an apathetic receptionist, she impulsively decides she rather would give birth and put the child up for adoption.

After breaking the news to her father and stepmother, she finds a well-off couple seeking adoption in the local PennySaver newspaper. She decides that they are "cool" enough to raise her baby but ultimately discovers they're not the perfect newspaper picture she originally saw. But she gives up the baby, and in the end, she seems happy to return to a less complicated high school life.

This is not an earnest "message movie" with preachy Christian overtones. It never would get all the critical acclaim it's received if it were a sermon. Its screenwriter, Diablo Cody, struck gold with her first screenplay but has a colorful past as a stripper in Minneapolis. It's not designed as an anti-abortion movie. It's a movie in which a sympathetic character chooses life, and we root for her and her decision. It's in effect pro-choice and yet ultimately pro-life.

Sadly, there are those who find it unacceptable that a movie contains a pro-choice message if it leads to life. Enter feminist newspaper columnist Ellen Goodman, who has denounced the film. She complains that her "inner fuddy-duddy" yearned to proclaim, "By some screenwriter consensus, abortion has become the right-to-choose that's never chosen." She watched "Juno" behind some young girls and worried about what was being "absorbed through their PG-13 pores." She doesn't approve of the prospect that they were lapping up "the rosy scenario of the motherhood fantasy movies." That's an odd way of characterizing "Juno," wherein she chooses adoption over motherhood.

Goodman deplores the current state of our culture, where the abortion debate is now grayer, even at the movies. She asks: "Is it still OK to ask whether this cultural 'compromise' ends up compromising the future of those kids in my theater?" Abortion, to her, is still the great principled refusal to compromise, the fulfillment of sexual liberation.

Real-life teenagers who opt to carry their babies and give them to childless couples are willing to endure condemnation and become what Juno quips is the "cautionary whale." They're the ones who show more maturity than the girls who have abortions because it will ruin prom or their place in the high school pecking order. They're the ones who show more selflessness than girls who have abortions because they don't want to worry and "not know" where their babies ended up.

Abortion will forever be an emotional, divisive issue in our society, with great passion on both sides of the debate. But for once, there is a movie whose message has brought cheers from both the pro-life and pro-choice camps. This is a good thing. Hollywood is applauding "Juno." The public should applaud Hollywood for "Juno," too.