Brent Bozell and Tim Graham
|
Posted: Sep 01, 2017 12:01 AM
Share   Tweet
The opinions expressed by columnists are their own and do not necessarily represent the views of Townhall.com. 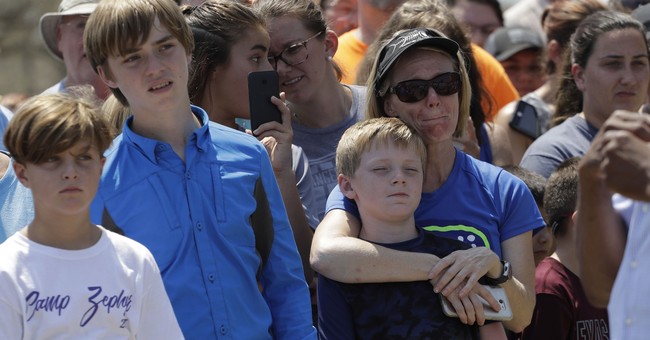 The nation's eyes are fixated on dramatic flooding in Houston after Hurricane Harvey, where the death toll (so far) is thankfully small compared to flooding in New Orleans after Hurricane Katrina in 2005. The government response on all levels seems to be fairly effective, and unlike with Katrina, the press coverage hasn't been dominated by accusations of racism or inhumanity in the rescue effort.

There's one obvious exception: cartoonists for the left. Politico tweeted an image by radical artist Matt Wuerker in which he mocks Christian wackos wearing Confederate flag shirts. A man being rescued from his rooftop declares: "Angels! Sent by God!" A Coast Guard pilot is shown correcting him. "Er, actually Coast Guard ... sent by the government," he says.

After mocking the victims still suffering from a hurricane as stupid religious folks, Wuerker tried to dig himself out of a hole on Twitter. He lamented: "Just trying to point out times like this we're lucky to have rescue services. Don't see how this takes away from private individuals heroism." Then he added: "Respectfully -- it's making fun of the Secessionist movement. Not at all aimed at all Texans." Politico soon deleted its promotional tweet, but not the cartoon.

A poll taken in 2016 (by Democrat pollsters) showed that 59 percent of Texans opposed secession, and only 26 percent expressed support. Wuerker claimed that his job is to prod people into considering "the ironies and subtleties of the world we live in," but cartoons like this aren't ironic or subtle. They're ham-fisted and ignorant.

Wuerker also felt it was safe to mock conservatives. "Times like this it's ironic to say that the government is the enemy," he said. It's not conservatives who have protested the front-line heroes of local government but leftist street agitators who have endlessly denigrated the police as racist child killers.

Then there's the scabrous French satire magazine Charlie Hebdo, whose latest cover shows a bunch of Nazi flags mostly underwater and a few white hands sticking out of the water in the "Heil Hitler" salute. The cover text in French translates to "God Exists! He Drowned All Neo-Nazis of Texas!" The cartoon was drawn by Laurent Sourisseau, alias "Riss," who was wounded in the 2015 Islamic terror attack on the magazine's Paris offices in which a dozen were killed.

This is just another reason why decent, God-fearing Americans should have resisted the free speech slogan/hashtag "Je suis Charlie," or "I am Charlie." These atheists have a right to their satire, but it overflows with vicious hatred and stereotyping. In 2012, it slammed Catholic protests of gay marriage with a cover that showed God the Father being sodomized by Jesus (complete with a crown of thorns) and a triangle with an eye representing the Holy Spirit "bringing up the rear" of Christ.

These cartoonists somehow assume that Texas is 100 percent Republican and/or neo-Nazi. Harris County, in which Houston serves as county seat, voted for Hillary Clinton over Donald Trump, 54 percent to 41 percent. Houston has a fairly large Jewish population (more than 45,000). A 2010 racial breakdown from the U.S. Census Bureau shows only 50.5 percent are white, 43.8 percent are Hispanic or Latino (of any race), and 23.7 percent are black.

But to liberal elites, all Texans are somehow bigoted white Christian males. Even a hurricane can't restrain their rage about their satirical targets having any power in America. Cartoons like these strongly underline why so many Americans find that the secular-progressive media are either tone-deaf or blatantly hostile toward what (and Who) they hold dear.