Trump to Anti-Gun Governors: 'Back Off'

Bob Barr
|
Posted: Apr 01, 2020 12:01 AM
Share   Tweet
The opinions expressed by columnists are their own and do not necessarily represent the views of Townhall.com. 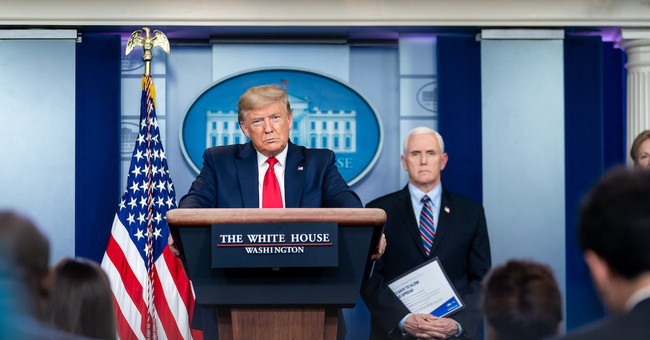 For more than 150 years, gun laws in the United States were essential, as written in the Bill of Rights: “A well regulated Militia, being necessary to the security of a free State, the right of the people to keep and bear arms, shall not be infringed.” It was not until the second half of the 20th Century that gun control as we know it took hold.  By that time, of course, the United States had survived a bloody civil war, expanded territorially from the eastern seaboard to the Arctic Circle, fought in and emerged victorious in two World Wars, and was the only superpower to stand against the expansionist communist regimes in the Soviet Union and Red China.

To say that the Second Amendment was instrumental in these iconic American stories is an understatement. Guns are intimately woven into the fabric of America’s unique, rugged individualism that has seen us survive numerous hardships in our country’s short existence; all without losing our quintessential grit and spirit of freedom. At least, it seems, until now.

With the stroke of their pens, a number of far-left local mayors and state governors responding to the COVID-19 pandemic, have declared the Second Amendment “non-essential.” Based not on centuries of American history and decades of legal precedent saying otherwise, these anti-gun officials saw a window of opportunity to make irrelevant, even if temporarily, a sacred constitutional right.

Closing down firearms retailers and shooting ranges effectively prevents large numbers of citizens from exercising their constitutionally guaranteed right to possess a firearm for self-defense; it also impedes the ability of police officers in many parts of the country from accessing those gun ranges to maintain their shooting skills.

Making matters even worse, many localities may now claim the authority, in declaring a “state of emergency,” to arbitrarily confiscate firearms from citizens, such as we witnessed in post-Katrina New Orleans.

Fortunately for the Bill of Rights, Donald Trump rather than Hillary Clinton is our president during this crisis.

Last Saturday, the Cybersecurity and Infrastructure Security Agency (CISA) within the Department of Homeland Security, issued a memorandum declaring that men and women “supporting the operation of firearm or ammunition product manufacturers, retailers, importers, distributors, and shooting ranges,” are essential. Alan Gottlieb, executive vice president of the Second Amendment Foundation, said in response to the memorandum that “every freedom-loving American owes President Trump and his administration a very big thank you for protecting our Second Amendment Rights.” Indeed.

The memorandum is extremely important for the Second Amendment in two ways. First, it is a practical defense of the Amendment. By virtue of the Constitution’s “Supremacy Clause,” the federal declaration making gun stores and other firearms related businesses “essential,” overrides moves by leftist mayors and governors to shutter these businesses.

Even before the CISA memorandum was issued, the National Rifle Association and other pro-Second Amendment organizations had begun to file lawsuits challenging anti-gun governors and municipal officials who were issuing unconstitutional edicts to close gun stores and firing ranges. The Administration’s declaration strengthens these legal challenges, especially should any public officials refuse to follow CISA’s guidelines.

The memorandum is also an important philosophical victory for the Second Amendment. The memorandum’s technical writing is not an artful or deep defense of gun rights as we would expect from Thomas Jefferson or James Madison. However, the very fact the Trump Administration would declare the ability to exercise one’s Second Amendment rights without added restrictions in an emergency to be “essential,” stands as an astounding rebuke to the contemporary, worldwide trend to deny and diminish the fundamental human right of self-defense; and to thereby render citizens increasingly dependent on their governments for protection.

If there is a silver lining in the dark cloud that is the COVID-19 pandemic, it is President Trump’s reaffirmation that the Second Amendment remains, here in America, “essential.”