US Must Keep Khashoggi Murder in Perspective

Bob Barr
|
Posted: Oct 24, 2018 12:01 AM
Share   Tweet
The opinions expressed by columnists are their own and do not necessarily represent the views of Townhall.com. 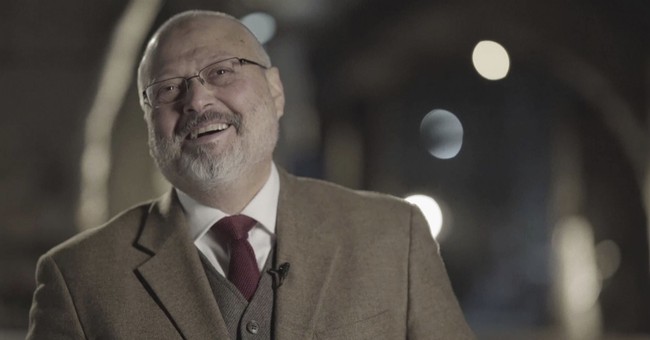 It's a brutal world out there.  Countries do horrible things.  Government officials often are complicit.  If America's relations with countries around the world were predicated on dealing only with those whose record of respecting life, liberty and the pursuit of happiness mirrored ours, the number of flags exhibited at the State Department's Hall of Nations would be small indeed.

And yes, even journalists at times find themselves on the wrong end of a government that does not abide by our legal and moral standards; it's happened over the years in Central and South America, Eastern Europe, Russia, China, the Middle East, and elsewhere.  Such apparently happened to Saudi journalist Jamal Khashoggi shortly after he entered his nation's consulate in Istanbul, Turkey earlier this month.

As the evidence of his grotesque murder mounts, the question for the United States is how should our nation react; what should we do in response?

Some in Washington clamor for drastic measures, up to and including a serious reevaluation and down-grading of our longstanding diplomatic, economic, security and national defense relationship with Riyadh. Others counsel silence.  The appropriate response lies somewhere in between; but tempered by the fact that this horrible incident has little if anything to do with the United States directly.  It is, at its core, a crime by Saudis against a Saudi.  There simply is no vital U.S. national security interest at stake.

First, our policy makers in Washington need to ascertain the facts.  Considering our intelligence capabilities are at least as good as Turkey's (after all, we largely trained them), this should not be difficult, and likely already has been accomplished.  Next, our Middle East experts need to carefully assess how this murder will affect the Saudi governing regime domestically within the Kingdom, and abroad, especially its geographic neighbors.   Decisions about the particulars of our bilateral relations with Saudi Arabia necessarily need to factor in those elements.

Following these assessments, Trump administration officials must make clear to their counterparts in Saudi Arabia that engaging in such actions as the murder of a well-known journalist with connections to the United States, will in fact undermine our relations with that country.   It is important to make clear that if the murder reflects a pattern or is repeated, it may very well result in serious adverse consequences in areas of bilateral interest; including military.

Additionally, this event should strengthen our resolve to ensure that all our military, economic and diplomatic "eggs" are not placed in one "basket" (namely, Saudi Arabia) in the region.  And, securing commitments from other allies in the area that such behavior as apparently engaged in by the Saudi government against Khashoggi will not be practiced by these other countries, and rewarding such commitments with enhanced ties, will serve us well and send an important message to Riyadh.

Finally, the administration must take the lead in tamping down cries for cutting off military or financial ties between ourselves and the Saudis.  Democrats predictably call for such drastic measures; but Republicans chiming in only weakens Trump's hand to practice hard-nosed, "politics among nations" based on our country's strategic interests, and accomplishes nothing of positive or long-term value.

If this tragedy forces the U.S. to take a realistic but measured assessment of our dealings with all players in this region, some good may come of it.  But those employing the Bully Pulpit of a congressional seat or a media outlet to demand short-term and drastic measures in response to what appears a singular criminal act by another nation, would be a serious mistake with long-term consequences -- a situation far too-oft repeated by the United States in dealings with that part of the world since the end of World War II.