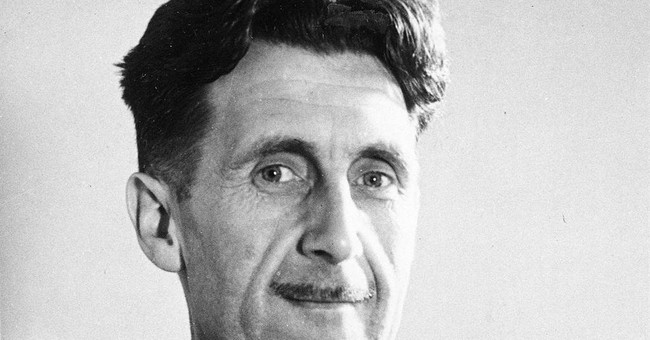 In George Orwell’s dystopian novel 1984, “Newspeak,”the cognitively-repressive language of the totalitarian regime included words such as “bellyfeel,”“blackwhite,”and “duckspeak.” Today, America’s Left employs its own“Newspeak,” which includes words such as“triggering,”“climate change,”and “social justice.” While the words may be different from Orwell’s fictional language, the penalties for violating the “truth” as defined by the ruling regime’s vernacular, is frighteningly similar -- ridicule, ostracism and, eventually, criminal punishment.

This was demonstrated most recently by a joint investigation of ExxonMobile by the New York Attorney General and a Democratic U.S. Congressman. This probe inquires into whether the oil company misled investors by refusing to mimic the Left’s narrative on global warming. The abusive probe orchestrated by New York's left-wing Attorney General Eric Schneiderman is loosely, almost humorously justified as "consumer protection." In reality, it is a thinly-veiled government assault on a private company that has done nothing other than to maintain a position on "climate change" that is at odds with that held by the Obama Administration and other leftist officials at the state level.

The goal of Schneiderman's attack on ExxonMobile? To use the threat of criminal sanctions to bring the company into line with the politically correct position that "climate change" is a dire threat that must be recognized publicly by the company, and to pressure the company to expend corporate assets to fight it.

Not to be outdone by a state attorney general and a member of Congress in election-year pandering to special interest groups, the Obama Administration doubled-down on the“Climate Change”Newspeak last week; officially killing the Keystone XL Pipeline proposal. According to Obama, he simply did not believe the pipeline had economic merit; a conclusion that was years in the making. More to the point, the President stated that approving such a project “would have undercut”America's “global leadership” on global warming -- as if under this President our country has led on anything.

The power of the Left’s Orwellian language code was on display also in Columbia, Missouri; where the President of the Show-Me State's flagship university was forced to resign in the face of an assault by the "social justice" police on that campus. Similar to the motives and bullying tactics evident in the investigation of ExxonMobile, radicalized student protesters at "Mizzou" claimed that former President Timothy Wolfe failed to respond appropriately to their allegations of “racism”on campus (evidenced by such “serious”offenses as the ignorant ramblings of a drunk white student in front of a black student group). Rather than stand up to the student rabble-rousers and prima donna football players, the University threw the President under the bus; and for good measure, the Chancellor after him.

It is clear, however, that the Missouri students were less concerned with genuine change, than with the desire to shame and destroy anyone in the way of their radical but ill-defined agenda. This explains why the “list of demands,”which actually had elicited a public apology from Wolfe, was met not by a willingness to talk, but by demands for his resignation. The students did not want cooperation from Wolfe, who apologized but initially had not succumbed to the wave of demands for "social justice" sweeping the nation. The students wanted, and got, his head on a silver platter. His resignation now becomes a warning to his successor, and to other heads of institutions of higher education, that they stand up to campus radicals at their own peril; especially considering that many boards of regents -- like Missouri's -- probably are more concerned with losing football dollars than protecting academic integrity.

The ruthlessness of these tactics illustrates the true nature of our enemy. We are not dealing with a bunch of petulant college kids or idealistic government do-gooders. We face an organized and determined movement of classroom Leninists determined to destroy any value, individual, or institution that stands in their way.

The fact that these pseudo-terrorists are actually accomplishing their goals should genuinely frighten every American who shares any appreciation for the value of civilized discourse and fact-based debate.

As we now move into the heat of the 2016 campaign, we will see these radicals emboldened. That is what makes statements like those from Ben Carson, who recently suggested naively that he favors using the Department of Education to “monitor”political bias on college campuses, both irresponsible and potentially dangerous. If conservatives want to stop or at least slow the neo-Trotskyism running rampant through the progressive movement today, we cannot be seen to lend it credibility by suggesting it is okay to use the same tactics as theirs but for the "right" reasons.