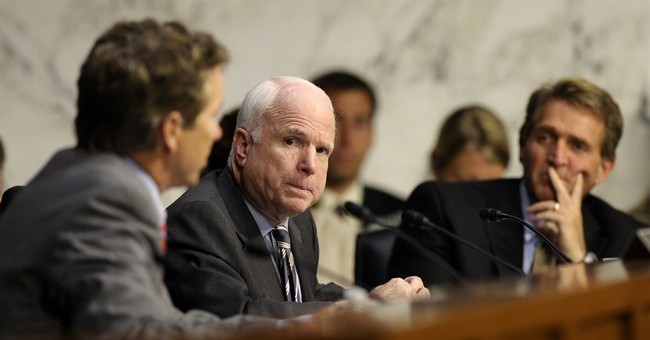 When asked to relate the results of the Constitutional Convention of 1789 to a citizen as he left Independence Hall, Benjamin Franklin is reported to have replied, “A Republic, if you can keep it.” As the annual Conservative Political Action Conference ended last weekend, one might reply similarly to an observer that the future of the GOP is bright, if we can keep it.

In 1975, Ronald Reagan, not yet one of conservatives’ most beloved presidents, sat down with Reason magazine for an interview about his thoughts on the future direction of the GOP. “The basis of conservatism is a desire for less government interference or less centralized authority or more individual freedom,” Reagan told Reason, “and this is a pretty general description also of what libertarianism is.” Reagan’s words were not meant as a specific defense of libertarianism, but rather as a call to Republicans to keep the door open for libertarian-learning conservatives in the fight against the common enemy -- Big Government.

Reagan’s words have proved prophetic time and again in the years since his presidency ended on January 20, 1988; most recently last weekend as Kentucky U.S. Sen. Rand Paul handedly won the annual CPAC presidential straw poll, considered an early barometer for the sentiments of the Republican grassroots in the next presidential campaign cycle. Paul received 31 percent of the CPAC vote, with Texas Sen. Ted Cruz -- another staunch foe of Big Brother -- in second place with 11 percent. To the chagrin of Establishment Republicans like Sens. Lindsay Graham and John McCain, it appears what they deride as the “wacko birds” have come home to roost in the GOP, and it couldn’t come quick enough.

For close to three decades, true conservative voters have been vastly underrepresented in the GOP. Republican primaries, especially those prior to the rise of the Tea Party, largely centered on debate between Big Government Republicans, and Slightly-Less-Big Government Republicans. Were it not for the rise of the Tea Party movement and Ron Paul’s 2008 presidential bid, it is doubtful the “Constitution” would be the buzzword it is today. Instead, we likely still would be mired in an endless-loop debate about enhanced national security powers, modified federal education policies, and slightly fewer pork projects than advocated by the Democrats.

However, as I noted optimistically the other week, and as Paul’s straw-poll victory confirms, there is a definite resurgence of fundamental, constitutional conservatism among Republican grassroots. This welcome phenomenon is particularly evident among young conservatives; and it appears to have completely flipped the script for the GOP, and has the Republican Establishment on the run. Recently, a poll in McCain’s home state of Arizona revealed he was the least popular incumbent in the country. If that revelation were not enough, Arizona Republicans officially censured McCain in January for his deplorable voting record, described as “disastrous and harmful” to the state and the nation.

One only has to look at the past two presidential elections to see why the GOP needs more candidates like Paul, Cruz, and the other rising stars who appeared at CPAC. “The Romney [presidential] campaign failed on many fronts, but surely one of the most damaging was its inability to articulate an appealing pro-growth, small government message,” Fox News contributor Liz Peek wrote last year; “the kind of message that would resonate with kids ready to conquer the world.”

Today’s voters, especially young voters, are rejecting the message of Big Government coming from both major political parties. This is a major reason why Obama’s support among youth voters dropped nearly 20 to 30 percent since 2008, and why the Republican Establishment has failed to gain any traction among the GOP grassroots. Voters want to hear about truly limited government, personal privacy, and civil liberties -- not about government programs that are simply slightly less costly, or less invasive, than those offered by the Democrats.

This leaves many Republicans in a curious position. There is no question the limited government philosophy of Republicans like Paul and Cruz are on the rise; however, they still are in the minority among their elected colleagues. So long as the GOP continues to be led by Establishment stalwarts, Constitution-conservatives face an uphill battle.

If it hopes to win future elections (including 2016), the GOP must not slam the door on libertarian-leaning independents (and even Democrats) looking for a new home; something Reagan understood as far back as 1975. Republicans need such voters even today in order to stop Obama and his liberal enablers in Congress.

If the 2016 GOP primary culminated in a two-way battle between Senators Rand Paul and Ted Cruz, it would be a watershed moment for conservatives long-awaiting the return of limited government in the GOP. The Republican paradigm of debating between Big Government and Slightly-Less-Big Government will have finally shifted to debating the substantive nuances among true conservative candidates. At long last, voting for a Republican would no longer feel like choosing the lesser of two evils. Instead, conservative voters will be selecting the best of the best of what the GOP has to offer.