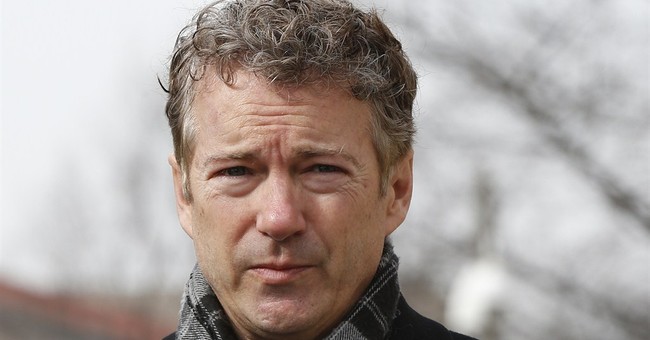 Judging by the crowds at Sen. Rand Paul’s speech yesterday -- along with the fact that 46 percent of respondents were between the ages of 18 and 25 -- it was a foregone conclusion the junior senator from Kentucky would win CPAC's annual presidential straw poll, right?

Mr. Cruz's 11 percent was still a big improvement for the freshman senator, who won just 4 percent in last year's straw poll. Neurosurgeon Ben Carson was third with 9 percent and New Jersey Gov. Chris Christie was fourth with 8 percent in results that signal growing discontent with the GOP establishment in Washington.

Respondents hailed from all 50 states, and only attendees who registered for the conference were allowed to participate. The polls opened at 7:00 AM on Thursday, and closed at 1:30 PM on Saturday. According to the pollsters, 2,459 total votes were cast. This is the second year in a row Mr. Paul has won the award.

Here's the statement his office released after the findings were made public:

“I am grateful to all the attendees who stood with me. The fight for liberty continues, and we must continue to stand up and say: We’re free and no one, no matter how well-intentioned, will take our freedoms from us. Together we will stand up for the Constitution. Together we will fight for what is right. Thank you and onwards to victory."

Meanwhile, the Senate Conservatives Fund (SCF) also conducted a survey of its own. Ted Cruz won that straw poll by a decisive margin:

The Senate Conservatives Fund (SCF) released the results of its 2016 presidential straw poll today. SCF conducted an online poll for its members who could not attend the Conservative Political Action Conference (CPAC) in Washington, DC today.

"The results of the SCF presidential straw poll are unique because they reflect the views of a large group of conservatives across the country," said SCF Executive Director Matt Hoskins. "Our poll shows that Ted Cruz is currently the conservative favorite for president in 2016."

I suspect attendees of the conference would beg to differ.