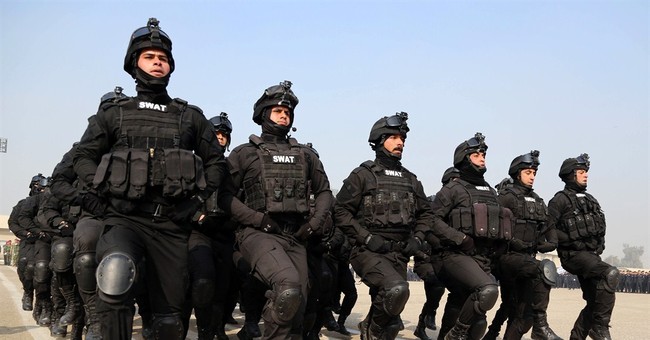 When I first started hearing about

Two very dissimilar situations yet both were treated by the authorities with the exact same show of force, which led me to believe that each incident was simply a staging ground for future nationwide turmoil. In a sense a dress rehearsal?

In both incidents the police did not show up in the normal blue uniform, delivered in the traditional squad car, but arrived in military mode. Called SWAT Teams, their armament rivaled the best the US Army had to offer. The kids in

As I started comparing pictures of the Middle East personnel, to those of

Over the past few years’ police forces around the country, whether in large metropolitan areas or small rural communities, have, with governmental assistance, transitioned from being the citizens’ protectors to being the citizens’ intimidators under the excuse of anti-terrorism.

“I am afraid, based on my experience, that Fascism will come to