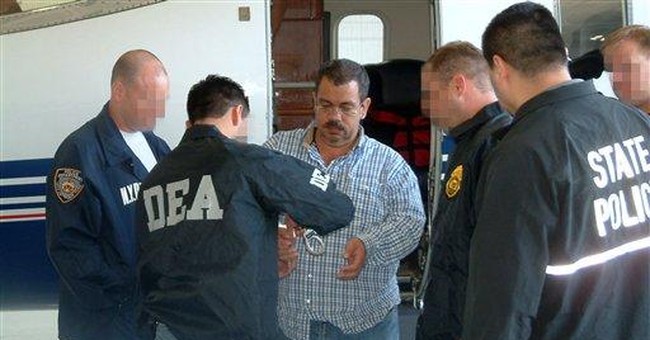 The DEA, which our great moral leader Richard Nixon created in 1973 and charged with the impossible but politically useful mission of winning the "all-out global war on the drug menace," turned 35 on July 1.

So, how's its track record after 35 years of difficult, often dangerous drug-war-making? If the DEA were a heroin addict, it would have overdosed on its own incompetence by age 6.

Despite its failures and the harm it's done to American society, however, the DEA has done more than merely survive. It's become a typically bloated, self-preserving federal bureaucracy whose power, budget and continuing existence bear no relation to its performance.

If you consider wasting umpteen billions each year to lock up mostly pot smokers and other perpetrators of victimless crimes a valid measure of success in the war on (some) drugs, the DEA and its fellow state and local drug warriors deserve high praise.

The DEA touts its latest alleged successes in cutting demand for drugs on its Web page. If you can believe the DEA's current statistics or those annual pronouncements of tough-talking White House drug czars, we're winning the drug war -- again and again.

Yet today illegal drugs are as plentiful and cheap as ever. And rates of drug use are essentially the same as they were when the DEA was born, according to Monitoring the Future, which each year since 1975 has studied the behaviors, attitudes and values of 50,000 American high schoolers.

Based on Monitoring the Future's latest study, the DEA's most significant career victory over drugs is that the percentage of 12th-graders who reported using marijuana dropped from 40 percent in 1975 to 31.7 percent in 2007.

Otherwise, despite untold billions blown on the war on drugs, the percentage of kids in 1975 who reported using cocaine (5.6 percent) and heroin (1 percent) has dropped insignificantly to 5.2 percent and 0.9 percent, respectively, in 2007.

Meanwhile, a new study of drug use by the World Health Organization casts further doubt on the long-term efficacy of our war on drugs.

Of 17 countries surveyed, China and Japan had the lowest rates of drug use and the United States had the highest rate -- by far.

Obviously, culture, economics and politics play important roles, but WHO's researchers found that there's no relationship between a country's strict anti-drug policies and its levels of drug use.

Maybe it's unfair to dump on the DEA, especially on its birthday. It may be the most un-American federal agency this side of the IRS, but it's only following orders.

It's not the DEA's fault that for 35 years Congress and seven presidents haven't had the brains or the political courage to decriminalize marijuana or at least work to humanize America's drug policy. Or that neither McCain nor Obama has promised to scale back a dirty war on the individual liberties of Americans that the Taliban would support.

So happy birthday, DEA. But not many happy returns.