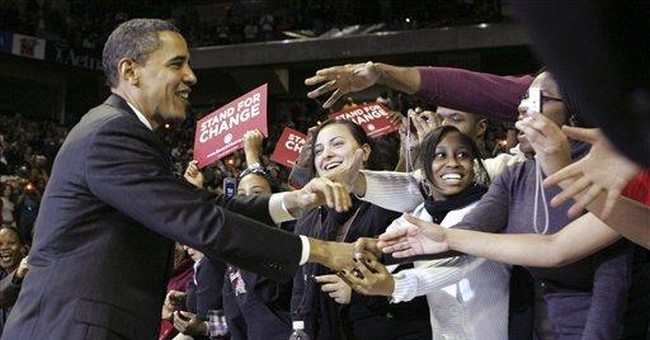 With the Democrat presidential primary looking like it will have to be decided at the party's national convention in Denver on Aug. 25-28, it’s a good time to revisit the country’s last contested political convention -- the Republican National Convention of 1976.

For you youngsters out there, that was where ex-California Gov. Ronald Reagan lost a close battle for the presidential nomination with President Gerald Ford and the GOP’s East Coast establishment by a vote of 1,187 to 1,070. Reagan's primary challenge and his stirring speech at the convention, which overshadowed Ford's acceptance address, made him a national political figure.

Ronald Reagan’s longtime friend and presidential policy adviser Edwin Meese, who holds the Ronald Reagan Chair in Public Policy at The Heritage Foundation, was at that famous Republican slugfest in Kansas City.

To get a foretaste of what might happen in Denver when Hillary Clinton Democrats and Barack Obama Democrats duke it out to see who'll face presumptive GOP nominee John McCain, we talked to former U.S. Attorney General Meese on Thursday, Feb. 7 -- the day Mitt Romney dropped out of the race:

Q: You knew it was going to be a tough fight when you got to Kansas City. What did you have to do as soon as you got there?

A: The principal thing was to find delegations that were somewhat uncertain or delegations that we thought the members of which might be persuaded to support Gov. Reagan on a subsequent ballot. It was a matter of whether we could obtain enough delegates to change what was the picture going in. First we had to find out what our relative strength was. That was done by asking for a rule change. It was that vote on the rule change -- which ultimately was not successful -- that indicated that the Reagan forces would not be able to overcome the number of Ford delegates.

Q: Can you characterize the Ford and the Reagan people?

A: Well, the major issues in the campaign had to do with primarily foreign policy and how to deal with the Soviet Union. Actually, even before the convention started, Gov. Reagan had achieved a major victory by having the party platform changed to take a harder line against the Soviets and Soviet aggression. So there was already a victory in policy before the convention started.

As far as the two sides, the Ford supporters, of course, were primarily establishment Republican Party figures and several of the state delegations. The Reagan delegates and supporters were primarily strong conservatives on both foreign policy and domestic policy. They involved some of the delegations that had supported Ronald Reagan in the primaries or in the caucuses that preceded the convention.

Q: Do you remember specifically what kind of arguments you used?

Q: Is it fair to say that you were taking a high-minded, ideological approach?

A: I think that the Reagan position espoused a more conservative philosophy for the Republican Party. Ronald Reagan presented a philosophical argument for supporting him. There was a major effort to get a number of the delegations -- particularly Southern states that appeared to be more agreeable to this philosophy.

Q: If the public had been able to witness what went on behind the scenes or behind closed doors in Kansas City, would it have been outraged?

A: I don’t think so, because it was pretty much an upstanding-type of persuasion on the issues rather than any backroom political deals.

Q: Were you Reagan people out-gunned from the start because Ford had presidential powers and perks at his command?

A: Yes. They had considerable advantage because of his incumbency and they were able to use that very effectively. At the same time we felt that there was a good deal of sentiment toward changes in some of the policies, particularly in regard to the Soviet Union, that it was worth the battle.

Q: Even though you didn’t get the big prize, you felt that you had some victories?

A: We had a number of victories. For one thing, several of the state delegations did in fact support Ronald Reagan and that led to more conservative leadership in the Republican Party in those states, as well as making some major changes in the party platform.

Q: Martin Anderson, Ronald Reagan's policy adviser in 1976 and 1980, was at the convention and he said the Ford-Reagan fight created a lot of bitterness in the Republican Party that continues to this day. Do you agree?

A: I’m not sure I’d agree with that. I don’t think that there was any more bitterness then as a result of that than there had been prior to that time. There have always been differences of opinion across a broad spectrum of views within the Republican Party, going all the way back to Taft and Eisenhower in the '50s, and Rockefeller and Nixon in the '60s. So this is nothing new to have some philosophical differences.

On the other hand, I think Ronald Reagan’s victory in 1980 pretty well dissipated any bitterness and provided a basis for unity, which in addition to Ronald Reagan winning big in 1980 resulted in the Republican Party taking the Senate leadership (in the 1980s) and then in 1994 ultimately getting both houses of the Congress.

Q: The last effects of the 1976 convention were that … what?

A: The lasting effects were that many more people saw Ronald Reagan as a national political figure and I think it paved the way for his victory in the primaries of 1980 and ultimately his election that year.

Q: How disappointed was Ronald Reagan with the results of the 1976 convention?

A: I think he naturally was somewhat disappointed that he had not been successful, but it was not a kind of disappointment that lingered, because he was pretty accepting of whatever happened. When he left the convention he wasn’t sure whether he would run again. But he was actually relatively cheerful, considering ... . He was never really down and was never really disappointed for very long. He just accepted that as what was going to happen and then left open the decision about what he did next.