Bill Murchison
|
Posted: Mar 01, 2016 12:01 AM
Share   Tweet
The opinions expressed by columnists are their own and do not necessarily represent the views of Townhall.com. 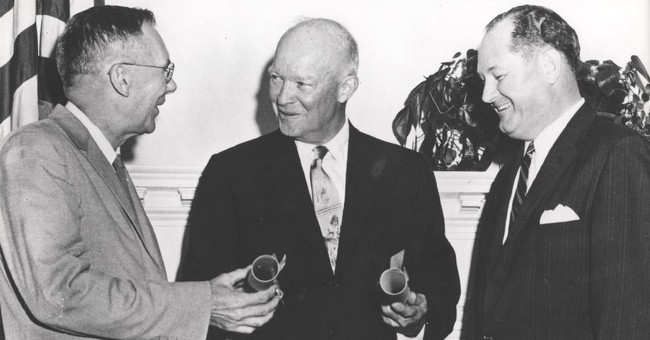 Imagine: Dwight Eisenhower, in 1956, wants to push from view Adlai Stevenson's prospects for reclaiming the White House for the Democratic Party. Ike darkens his brow and comes forth: "He called me 'Mr. Meltdown.' Let me tell you something, last night during the debate, he went backstage, and he was having a meltdown. First, he had this little makeup thing applying, like, makeup around his mustache, because he had one of those sweat mustaches. Then he asked for a full-length mirror ... maybe to make sure his pants weren't wet."

Can we envision it? Or do we lower our chins, muttering, "Dignity, dignity, where'd you go in the last half century?"

Never mind. The finesse and decorum you would expect in discussions of how to preserve human freedoms were last seen squashed on the street by a television truck covering the Trump campaign. A few of us old-timers shake our heads sadly. I'm not sure how many others do. Ridicule and insult are the currency of political discourse in our time. Witness Trump. Witness the methods deemed necessary to derail his presidential express, such as the above-cited philosophical disquisition -- which was actually made by none other than Marco Rubio, a theoretically serious contender for the White House.

A Rubio adviser makes a reasonable -- under the circumstances -- point. "We came to the conclusion that if being a part of the circus is the price you have to pay in order for us to ultimately be able to talk about substantive policy, then that's what we're going to do." Thus Rubio's offering the full-length mirror image. This explanation assumes that, once the clown acts have cleared out, the big top crowd will be ready for some serious talk about capital gains taxes and Afghanistan withdrawal dates.

I kind of doubt that will happen. The circus image has a haunting quality.  Panem et circenses -- bread and circuses -- were what the Roman populace came to crave for the entertainment and release they provided.

It would be peachy keen to nail Donald Trump as the originator and ringmaster of the revels into whose service he presses would-be serious candidates such as Rubio. His Tarzan-like chest thumping gives him credibility he would lack otherwise as teller of "truths," which his biggest fans want to hear for the sake of hearing them. These are "truths" such as: Wall off those Mexicans! This is politics more as pandering and entertainment than as propositional governing. No one with an IQ over 42.5 believes such a wall will ever be built, far less that Mexico will "pay" for it. Oh, but it sounds so good!

The root of the Trump problem isn't Trump, nevertheless. It's the popular habit, cultivated over the past three quarters of a century, of turning every great question into a political question: morality, opportunity, achievement, social stability, you name it. Not even freedom used to be so politicized as now. Freedom, by the reckoning of Westerners, is a divine blessing meant for thoughtful exercise and conservation: not at all a prize to be carved up and distributed at election time according to some White House or congressional formula.

Politicians' propensity to gain power through voter temptation is the doorway to the Age of Trump: the age of despair over government's ability to get anything right without getting more things wrong.

There used to be some dignity in the political profession, whose basic purpose was to give Americans scope for fulfillment according to agreed-upon rules of conduct. As we no longer agree on anything -- thanks to our varied cravings for government goodies -- politics in the 21st century is a scramble without dignity, lacking serious purpose, lacking the means of harmonizing human relationships. We might all do with a look at ourselves in any full-length mirrors Donald Trump can spare.