Conservatives vs. the 'Liberal Media' 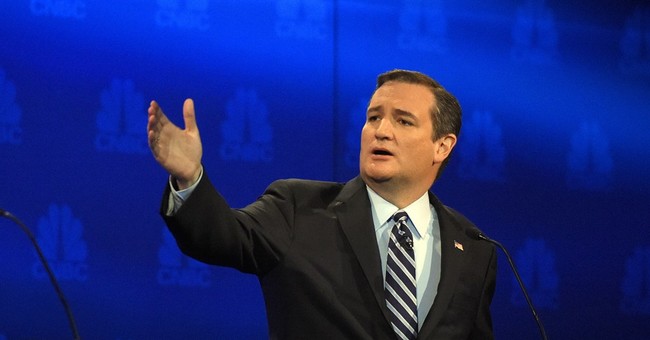 "The questions that have been asked so far in this debate illustrate why the American people don't trust the media. ... And nobody watching at home (believes) that any of the moderators (have) any intention of voting in a Republican primary." -- Sen. Ted Cruz, at the Oct. 28 GOP presidential debate.

With the carbonated "pop" produced by Ted Cruz's reaction to the debate panel's questions, off came the lid from a familiar debate topic -- the liberal media.

Are the media liberal? As the late Conway Twitty would surely reply, "Is a bluebird blue?" Bless us one and all, the members of the news media lean proudly left in their politics and attitudes. Cruz hit the nail on the head: Nary a one of his inquisitors at the debate is likely to vote in a Republican primary. Each, we might reasonably suppose, has mentally pledged fealty to Hillary Clinton.

Now and again, commentators and scholars try to nail down the specifics of this. The standard textbook on the topic was "The Media Elite" by S. Robert Lichter, Stanley Rothman and Linda Lichter. The authors, in interviews conducted with media muck-a-mucks, documented a distinct preference for Democrats and for liberal policies. Most interviewees, for instance, supported abortion rights. Few ever darkened a church door.

And now comes Ted Cruz to propel the issue once more to notice. He got a big hand for doing so. There will be more sounds of support, I imagine, as Republican strategists and campaigners map the gap that supposedly separates ordinary Americans from those who misrepresent the country's problems.

The media will rejoin: 1) No, not liberal; we're mainstream; 2) Yes, we tilt leftward, but we work hard to be fair and inclusive; or 3) Are you against the First Amendment or something?

The debate has waxed and waned over the half-century of my participation in the affairs of newspapers, magazines and university journalism departments. I deplore on principle the idea of putting a thumb on the scale when covering news events. But such high-mindedness clearly failed to stop the New York Times' John Harwood and CNBC's Carl Quintanilla from sitting coldly in judgment rather than sincerely questioning. It wasn't the Spanish Inquisition; neither was it Exhibit A in the case for a free, unfettered press.

The media are liberal. I think there is not the least likelihood of this state of affairs changing in our lifetimes. Liberalism is the fallback philosophy in fields that involve the exchange and propagation of ideas. You might suppose -- some liberals do suppose -- that this means conservatives are dumb. I can't convince anyone this isn't so with a single sentence. But truly, it isn't so. Just take a look at the conservative intellectual bench over the past half-century and more: Bill Buckley, T. S. Eliot, Milton Friedman, Irving Kristol, Antonin Scalia, The Wall Street Journal editorial board, plus occasional drop-ins such as H. L. Mencken and F. A. Hayek. I do not think the likes of Ken Galbraith, Maureen Dowd, Paul Krugman, Norman Mailer, Gore Vidal or John Harwood outshine this galaxy. But there's no accounting for taste.

Or for the sheer, undiluted joy of disruption. The media are into kicking over tables and staining neckties with ketchup: in the interest, supposedly, of keeping our rulers honest. A fond conceit of liberals is that rich white men run America. So, kick 'em around; expose their lies.

So we beat on, boats against the liberal current, headed for November 2016. I would bet we're going to hear a lot from conservatives about "the liberal media" between now and then. It gives a lifetime member of the media no joy to predict that much of what we hear will be grimly, unpleasantly true.