A Sense of Proportion 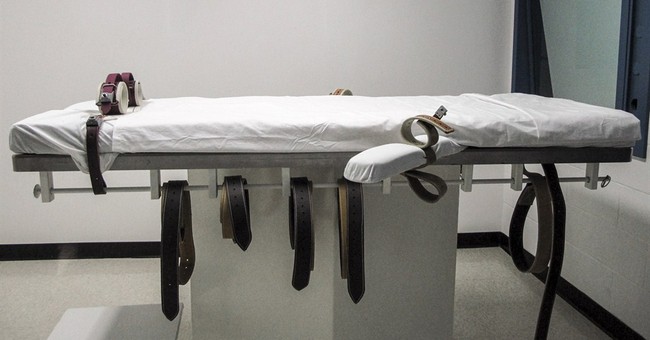 Trending
Evidence of the country's much-vetted shift to the political left is the strengthening and spread of the movement to abolish capital punishment, that relic of barbarous times when we struck off people's heads for, you know, social revenge. Sort of like what ISIS does. As we don't want to be like ISIS, or the remaining repositories of organized revenge, such as Iran, we need to cool it on capital punishment.

So, in part, goes the argument that Nebraska legislators adopted in overriding their governor's veto of a bill to abolish the death penalty. Nebraska got a lot of publicity at the time because there wasn't much else going on besides the Texas floods and also, because of Nebraska's being a "red" state, its action might be seen as auguring great change in the near future: a movement from revenge to mercy.

It is hard to be against mercy, whose quality, Portia tells us, is not strained but droppeth as the gentle rain from heaven upon the place beneath. Clarence Darrow made a similar, and successful, argument in behalf of Leopold and Loeb, the killers of 14-year-old Bobby Franks. Everyone favors mercy -- in the abstract.

The right balance is hard to get: all the harder when the state loses its historic right to repay moral foulness with deprivation of life.

Nebraska has no such right henceforth. We'll see how it works out. Under present provisions, another Starkweather rampage would end with pronouncement of a life sentence behind bars.

Ah. Don't remember Charlie Starkweather? You would if you were alive in 1958, when Starkweather, helped by his 14-year-old girlfriend, murdered a mere 11 innocent Nebraskans. The daily headlines were, shall we say, transfixing. Finally the cops got him.

Some events moved faster in those days than they do now. Starkweather was tried and sentenced to death. Nebraska electrocuted him short months later.

If memory serves, no gooey-sentimental tears poured forth from high places -- academia, for instance, or the Eastern media -- over his impending fate. The sense of the thing seemed to be that if Charlie could kill the wife of a businessman, then wait for the husband to return in order to kill him also -- this was one example of Charlie's method -- Nebraska would not be much deprived of his contributions to the general welfare.

That was half a century ago, of course, and Nebraska has a right to change its mind as to the specifications for enacting justice. By dumb coincidence, nevertheless, another mind-change about capital punishment took place only days before the Nebraska vote. A federal jury in Massachusetts -- Massachusetts, I ask you! -- voted to execute Dzhokhar Tsarnaev for eradicating the lives of innocent bystanders at the Boston Marathon and seriously wounding dozens more. The jury said in effect: We can't have this; no one this depraved deserves to live.

Often the opposition to capital punishment proceeds -- or seems to -- from the honorable conviction that the state shouldn't kill the innocent. What if this guy didn't do it?!

Dzhokhar did do it, nonetheless, whether under his dead older brother's influence or because he just wanted to. Was the jury, through sighs and grimaces, to extend to Dzhokhar the quality of mercy? On what grounds? That he hadn't been such a bad boy as to deserve the same fate he inflicted on others, including an 8-year-old boy?

The phenomenon of human sin clogs discourse on all human actions, all human remedies. Always there is the capacity to slip up, do the wrong thing. Thus the wheels of justice move -- or should in every case -- with deliberation and care. Yet move they must, the movers intoning always the rightness of right, the wrongness of wrong and the awful difference between the two.

Capital punishment, for all the objections raised against it, declares that actions have consequences proportionate to their horror and evil. Take away the sense of proportion -- a primary feature of human rationality -- and what you have is what Nebraska is going to have, like it or not.