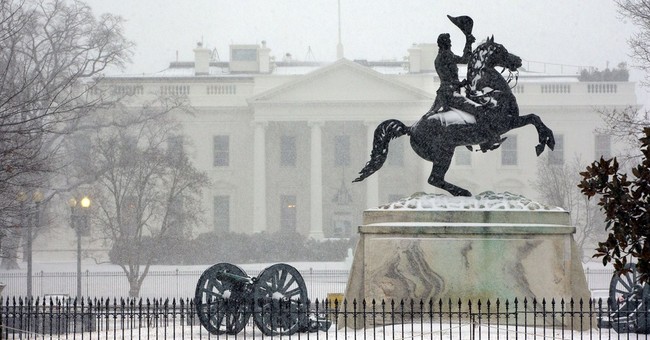 New Hampshire Democratic Sen. Jeanne Shaheen's notion is that whoever we come up with for a replacement needs to be female, there being no other females on our paper currency. An online poll suggests Eleanor Roosevelt, Harriet Tubman, Rosa Parks, and -- get ready -- Wilma Mankiller, a former chieftains of the Cherokees.

Mankiller's promotion to greenback celebrity -- viewed apart from her titillating name -- would be seen, most likely, as an act of overdue retribution. According to one kick-out-Jackson activist, our country's seventh president "engineered a genocide" by conspiring with Congress to drive the Cherokees, at bayonet's point, out of the Southeast and into Oklahoma.

All I can say is, our country's story takes some wild turnings in the 21st century. For one thing, we've learned there wasn't much "diversity " in the olden time. Everyone who used to lead us turns out for some reason to be white and male.

Accordingly, we need to play some catch-up ball. It's never too late to amend the sin of insufficient devotion to civil rights before anyone knew what the term meant. We kick out Andy Jackson, folk hero as he was, victorious at the Battle of New Orleans, twice elected president, and we install, if not Mankiller, then maybe ... uh, Rosa Parks, inspiration for the Birmingham bus boycott that in time lifted Martin Luther King to prominence.

Rosa Parks, though unquestionably a woman, is not famous for having followed in any significant way her act of resistance to a demand that she surrender her bus seat to a white person. A gutsy and honorable lady she was. Does she, on the personal achievement scales, outweigh a U.S. president?

Well, then, Mrs. Roosevelt. How about her? -- wife of a president, tribune of liberal causes. For all her fame, Mrs. Roosevelt, like Rosa Parks, is more symbol than anything else. She stood for things. That's all it takes? Why not her husband, in that case, who not only stood for things but did things -- and is therefore on the dime? We could multiply his fame 200 times by upgrading him to the Twenty. But, then, he wasn't a woman, which defeats the enterprise.

We're not into Comparative Achievement here. We're into Historical Makeover, which isn't about whom we honor so much as it's about whom (assuming particular advocates get their way) we \ ought to honor.

Playing around with history can be dangerous, as reflecting temporary trends and passions instead of worth and achievement; reflecting, too, basic ignorance of history's complexities.

Was Andy Jackson -- for instance -- a shining knight? Not by any calculations of which I am aware. In the case of the Indian deportations, he defied a pro-Cherokee Supreme Court ruling. ("John Marshall has made his decision; now let him enforce it.") Yet he declared in his inaugural address that the federal government should do only that which the Constitution allowed. Oh, boy -- if only! He favored hard money and suspected all banks. He was a common man who tried to work for the common man. He played the class warfare angle. He was plain-spoken and honest. He overcame John C. Calhoun's attempt to "nullify" a tariff disliked by the South. The Democrats salute his memory at their annual Jefferson-Jackson Day fundraising dinner.

Make of it what you will. A 20th-century American government in 1928 decided Jackson's visage belonged on our currency, along with Washington's and Lincoln's. Oust him we could -- only to find ourselves, a bit later, saying, Wilma Mankiller, oh, come on, and commencing thereupon yet another quest for supposedly up-to-date symbols. Why don't we just give it a rest, this symbol business, and find ways of justifying the faith and works of the men -- yes, all those white men! -- who invented America?