The West Wakes Up -- Maybe 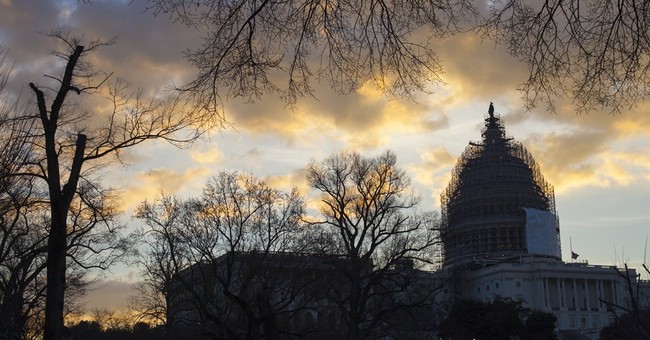 "The West," as we pleasantly call the tatty, post-Cold War remnants of Western civilization, got off its numb if still-hifalutin bottom Sunday and took to the streets of Paris in defense of -- well, its life, its future, the future of everything in life that matters.

An existential threat will do that to you. People want to grind you down, mow you down -- it gets you to thinking. And acting.

The sort of assault on life and freedom that three Islamists with the moral sense of a dead caterpillar launched last week in France would have taken more robust generations about a millisecond to decode. Hands would have felt for sword scabbards, and jaws would have set with determination.

We shall have to see how well the various leaders who linked arms in horror and outrage have appropriated the lessons of the massacres. Tolerance for Diverse Viewpoints, a favorite Western motif and delusion, could reassert itself after last week's nightmare wears off. It was encouraging all the same the other day to hear France's prime minister acknowledge that his country was actually at war with unreason and hatred. It has been encouraging to see millions, probably, link their lives and personal identities with "Charlie." It has been a long time coming, this burst of righteous anger and resolve. Frankly, one didn't know the West still could hum the melody or recall the technique.

It is not --  grands dieux non  -- that ground is being presently cleared for a war against such ornaments of Western civilization as tolerance and free speech and the freedom of worship. It should be noted that tolerance and free speech and free worship are among the civilizational elements against which the moral morons have declared war. The morons have less regard for genuine tolerance than has anyone on the supposedly blinkered, "nativist" French right. They certainly have no regard for Christianity, which, were they to prevail over a morally weakened West, they would drive underground, amid many, many beheadings.

Having arisen from its elegant bottom, the West requires encouragement to remain standing for the struggle under way -- the entirely necessary struggle to drive the moral morons into those caves they would have the rest of us inhabit. It was astounding and gratifying to see, among others, the leaders of Germany, France, Poland, Israel, yes, even the Palestinian Authority, marching shoulder to shoulder.

Someone, to be sure, was missing. Who was it? Ah, of course -- the president of the United States, the president once fond of assuring us al-Qaida was "on the run."

Recent American presidents saw themselves, or were seen, as the Leaders of the Free World. That wholesome notion presently lies fallow, awaiting the inauguration of Barack Obama's successor. When Obama can't make a speech, he seems not to know what to do. When it comes to leadership, there is doubt he could persuade a foursome of golfers, at 2 p.m. on a 110-degree day, to search out a drinking fountain.

A weakened and too-often-irresolute West may have to look to its own devices for survival. Which might be no bad thing. Figuring out the dimension of problems created by the moral morons has not been Europe's long suit. For example, the Islamicization of certain British government-funded schools only recently began to raise civilized eyebrows, with tut-tuts and promises to Look into the matter, rather than action to outlaw forever taxpayer-funded outrages against liberty and the Christian religion.

In truth, Christianity's recent recession to the margins of European life is likely the No. 1 cause of the continent's plight. When you quit believing whole chunks of what you formerly believed, you abandon the marketplace of ideas to God knows who and what. To moral morons, say, with no notion of your erstwhile codes -- "Thou shalt not kill," and all the rest.

The morons and murderers need prompt ejecting from the bailiwicks they have chosen to corrupt and degrade. Maybe the time, after all, has come. Maybe even the president of the United States -- whether it shows or not -- is hoping so.