The Proofs of the Christmas Pudding 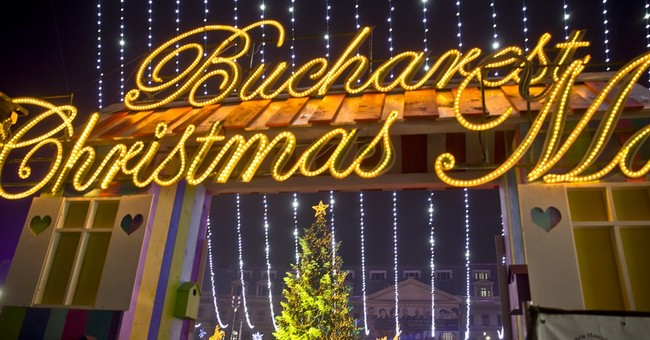 Bethlehem. Ah. Yes. There we were as a matter of fact, and not many weeks ago, either. Also at Nazareth. Also -- of course -- at Jerusalem, where everybody goes who goes to the Holy Land, with a sense of immense events and occasions to be taken in, the more so as Christmas draws near.

I can say this about the Holy Land: Its rocks and crevices and seas and flaming sunsets prove nothing to those who have declared themselves immune to the proofs pointed to for the past couple of millennia in terms of the baby known to history as Christ the Lord. You drive past a hillside reported as the hillside occupied by those shepherds summoned by angels to attend the newborn child in his manager. Was it the place or wasn't it? Who knows? Who knows for that matter, pious claims notwithstanding, where the baby himself lay? If he lay anywhere. If there was a baby at all.

The acid skepticism of centuries past concerning the reality of the Christian revelation bubbles in the 21st century to a degree, and with a corrosiveness, unseen for quite a long time. Or so we imagine. How do we know, really? What are the thermometers for taking the spiritual temperature of previous ages? In the end, what can we know about things we have not ourselves seen?

The Washington Post last week provided a forum for the questioning, the overt doubting, of an Australian author it identified as Raphael Lataster, lecturer in religious studies at the University of Sydney and author of the book, "There Was No Jesus, There is No God." An interesting title, I might remark parenthetically, from a scholar named for one of the archangels.

Whatever the case, no jury can ever indict Prof. Lataster for the crime of ambiguity. The gospel accounts of Jesus' birth and life? Can't take 'em seriously, Prof. Lataster contends, concocted as they were "by non-eyewitnesses, most of whom had obvious biases." St. Paul never claimed with his own eyes to have  ecce -ed the  homo. His gaze rested on a spiritual Jesus, high above the world. This "historical" Jesus who entered the world in a stable, performed (as Prof. Lataster might view it) feats of magic, offended the Jewish leadership, got himself put to death on a cross -- where did such a one come from?

Wave all the Bibles you want to in front of the man. He isn't buying any of it. He sees no possibility of proof.

A world of touch and taste understands what he means. We're to take this stuff on faith? Not the most popular word in the 21st century -- faith; implying, it seems to many, the suspension of reason, the embrace of the unknowable.

The oddity of that attitude consists in the difficulty that comes with knowing anything beyond the shadow of a doubt: the existence of Prof. Lataster, for instance. Well, the Post says he wrote this piece. I didn't see him do it, did you? How do I know the Post didn't make up his whole persona? Oh -- you could introduce me to him? That's on the assumption you can prove the man being introduced is Raphael Lataster and not some hired actor.

See how the "proof" business goes? What can we ever know that someone can't question if the will exists to question it? The question of worldly "proofs" when it comes to the birth and life of Christ turns far more on the need not to believe -- the need to subordinate, if not conquer, personal ambitions and jealousies -- than on the need for a demonstration of supposedly believable "facts." The baby of Bethlehem asks entirely too much of those who follow him -- to wit, everything they have.

A second oddity crops up here. For the millions who for centuries have self-identified as Jesus' followers and disciples, often at mortal cost -- "proof" of Latasterian quality never comes into the equation. It's always, yes,  oui, da, ja, por supuesto. Latasterian culture, if it ever stooped to consider such things, might be impressed by the simple endurance of Christianity in fundamentally unchanged form -- all suspect "proofs" laid aside; the proofs of love and sacrifice outweighing them all in the end. Beats even the brief sight of a Palestinian hillside, I can assure you.