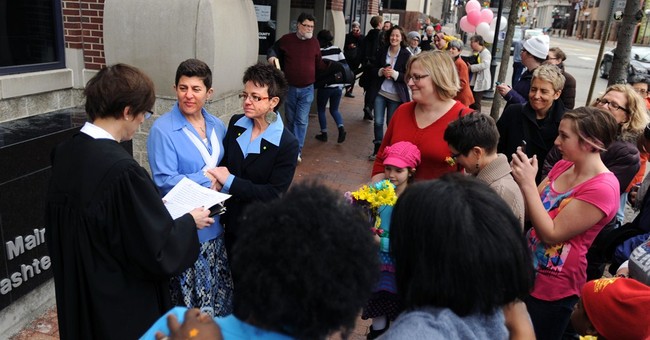 "Lib-er-al adj. 1. a. Not limited to or by ... authoritarian attitudes, views, or dogmas ... b. tolerant of the ideas and behaviors of others; broadminded ... "

May I amend that definition from "The American Heritage Dictionary of the English Language"?

A certain amount of satisfaction -- I'd hate to say pleasure -- accrues to non-liberals watching liberals fall all over themselves trying to explain why certain beliefs and convictions just can't be expressed in Today's Society. The reason (in Liberalspeak) that Mozilla forced out Brendan Eich, the inventor of JavaScript, last week is that no good liberal is going to put up with non-liberal thinking! Non-liberal thinking isn't thinking! It's bigotry!

Come to think of it, Eich probably should give thanks that Mozilla, besides canning him for once supporting a California campaign to affirm traditional marriage norms, didn't organize a tar-and-feather party in his honor.

Out he went anyway, as we all must have heard by now, to the disgust of the bedraggled few who believe what liberals used to pride themselves on believing; to wit, the right to speak your piece with relatively few societal constraints is a good thing rather than a crime against the social order.

But, then, I'm in the media. Many of us in the media share with John Milton, a liberal in his time, the odd idea that free speech bolsters rather than hinders civilization. I was once fond of assigning to my university's journalism students Milton's "Areopagitica" -- his attack on government licensing of the press. Discussion was a good thing, Milton contended. Tell what you think, let critics reply -- surely that was the ticket. "And though all the winds of doctrine were let loose to play upon the earth, so truth be in the field, we do injuriously by licensing and prohibiting (italics mine) to misdoubt her strength."

In Liberal America they don't much care for my friend John. Eich's offense was to donate $1000 to the Proposition 8 campaign, a California voter initiative -- it passed by a healthy majority -- defining marriage as the union of a man and a woman. It was hardly an eccentric claim, representing as it did a viewpoint held everywhere, always, and by all: until the movement for same-sex marriage got going a few years ago. This transformed -- in liberal eyes -- the marital terrain. Suddenly, everything we used to believe about marriage was Wrong and Evil and Homophobic.

And Brendan Eich didn't get it. Throw him out! Teach the bum a lesson!

Whatever Eich himself may have learned from this sleazy episode, the same-sex marriage movement learned more. It understands, for instance, its immense leverage in Silicon Valley, where the whole issue is proclaimed, settled and finished. A letter on OKCupid's Firefox site liberally, shall we say, gave Eich what-for. OKCupid is a dating site, with an interest in particular outcomes. It insisted that "those who seek to deny love and instead enforce misery, shame and frustration" -- meaning Eich -- "are our enemies, and we wish them nothing but failure."

Talk things out with love-deniers? No, no, no! That would be to acknowledge the possible validity of their position. Shut up, OKCupid explained to them, before its letter was taken down. Beat it! Get outtahere!

The Left -- a more accurate name for liberalism -- has a gift for this kind of intimidation. In the '60s, its contentions with The Establishment over drugs, free sex and Vietnam led to the conviction that people who are wrong are just wrong and need to get out of the way. There ensued campus speech codes and indoctrination classes on racism and women's rights -- favorite causes of the anti-free speech faction.

Now it's same-sex marriage and the burgeoning movement to make bakers and photographers, whatever their convictions, provide services to seekers of same-sex unions.