Obama and his 'Enemy' Fetish 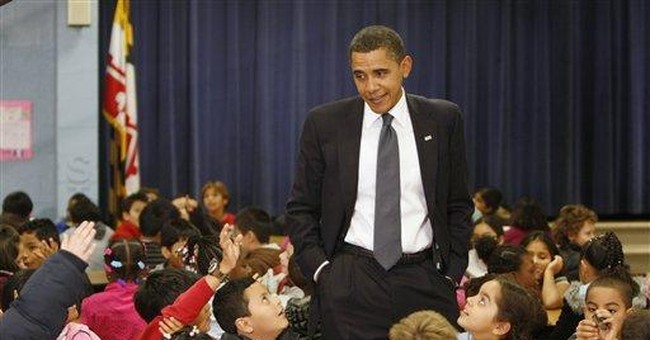 One element in last summer's Obama ruckuses -- there's always an Obama ruckus going on, it seems -- was a few placards at tea party rallies comparing the president to a certain A. Hitler. Both the comparisons and the ensuing ruckus they caused were rubbish. Couldn't we all just see Obama heil-ing huge crowds to fury over national enemies and the like? Nope. Not a bit of it.

The business of handling "enemies," nevertheless, needs review and reappraisal at the highest White House level, meaning the presidential level. As White House frustration mounts over criticism of the health care, so unreasoning rage mounts and, unfortunately, finds outlets. The Obamans are fouling their own nest.

A few days ago the story was pettish administration attacks on Fox News. Mean ol' Fox was being ugly about the health care reform -- suggesting overhaul of the overhauls in progress. No way! The White House communications director stuck out her tongue at the Foxies. Then Rahm Emanuel and David Axelrod, trying to advance the agenda on CNN and ABC respectively, made things worse, declaring (in Axelrod's words) that Fox, far from presenting news, was "pushing a point of view."

Mercy! Push a point of view? Nobody in the news media would do that -- not Keith Olbermann, not Jon Stewart, not Rachel Maddow. Only those mean ol' conservatives at Fox would do anything so underhanded as question the means directed toward making over one-sixth of the U.S. economy!

As for the president, he picked up the cudgels himself, clobbering the health insurance industry in his Saturday radio and Internet message. How dare these fellows claim the Senate approach to overhaul would raise premiums 18 percent more than otherwise would happen over the next decade? "Smoke and mirrors," said the president (making fine points in the debate instantly clear). "Bogus"! And just a minute here: maybe -- maybe -- it was time to review the insurance industry's antitrust exemption.

That's right -- don't let those critics speak out when all they want to do is confuse people about the patent virtues of what the White House wants! How dare these guys! Shut up, shut up!

There's nothing in the world like freedom of speech, so long as the speaker booms out your praises, sprinkles his remarks with words and expressions such as "hope," "change" and "the fierce urgency of now." In such a case, welcome to the White House. Can we pour you a glass of lemonade, give you an autographed photo of the president? You others out there -- shut up!

This isn't Hitler stuff to tell the truth. It puts one more in mind of an elite class of Chicagoans: the kind once widely known for putting the squeeze on merchants who had chosen a different supplier and now needed a little persuasion -- so's the guys could finally see the light, right? Labor unions, too, back in their heyday, were good at a little friendly coercion, slyly demonstrating to bosses the virtues of "cooperation."

The use of political muscle certainly isn't without precedent. It's just, in the present context, that of an administration that campaigned on bringing us together … it's just kind of sleazy and distasteful, not least on account of the stakes involved in health care. Bad enough the White House never announced, and certainly never held, a national conversation on health care. Worse is the ongoing attempt to have Congress cram down Americans' throats a plan most Americans don't even want, if polls are to be believed.

Trying to stifle debate -- to ridicule or intimidate your opponents isn't smart politics. It's stupid politics. Voters resent it. All the more they will resent it, if opening at Christmas the nice, shiny present from Congress, they dislike its look and smell. They might decide to throw it back at the giver.

Dishonesty is a ghastly, if painfully familiar, human trait -- exclusive neither to fuehrers, nor emperors, nor elected presidents and their well-paid advisers. The funny thing is, it doesn't even work for long. And when it stops working, Katie, bar the door!