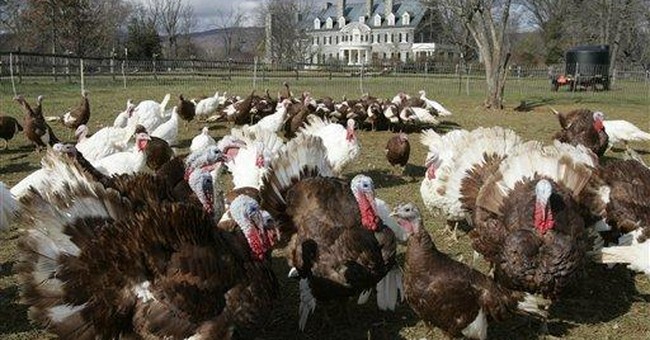 The question is bound to surface the moment heads incline in reverence at the Thanksgiving table, over pre-dinner drinks, post-dinner drinks, kitchen clean up, trash take out.

Answers will vary. What won't vary is the perception that Thanksgiving 2008 brings trials of a sort not experienced in the United States of America in some years. An annus horribilis, this year, a stinker, a mess. Browse the newspaper, and hardly anything good presents itself for inspection. Job layoffs, stocks headed south, General Motors in trouble, bankers begging, budgets busted at the governmental and the domestic level alike, home foreclosures, credit seizures in the marketplace. Aarghhh!

How did we get where we are and what does it mean? The second question is, likely, the more troublesome of the two. What next? The terrifying word "depression" crops up even in news accounts by no means suggesting the possibility of such.

Thanks for what? It takes a little rubbing of the temples to consider, nor would a crackling fire on a cold afternoon come amiss. Thankful for the deep things, the rooted realities may be the partial answer. Memory is key to unlocking the door on gratitude.

There was a time when bombs, thousands of miles away, brought a stop to normal life on a quiet Sunday morning, and alerted families to the awful prospect that life as they had lived it was over, not to resume, if ever, for quite a while. And still they kept going: soldiers, sailors, workers, wives, husbands, children, churches. Because that was how things were, and with reality there just isn't any arguing.

One could go on. When do we finally get life right for everyone? When do the wars stop? When does everybody have a new SUV and all he wants to eat? Durned if we know. We keep going anyway. Someone says a word, strikes up a tune, makes a gesture, and it's onward, come on, let's get out of here.

A lady to whom I was related, born in 1911, a time when a child was by no means assured a safe passage to maturity, was wont to tell her children the story of a convict she'd read about. This worthy had experienced in a single day the delirious joy of escaping the clutches of the FBI and the crash of expectations when he was recaptured and again the handcuffs went on. How'd he feel? The convict sighed: In this life you got to take the bad with the good. It struck the lady who told the story as deep, if accidental, wisdom. Yes, that was how it was: life as mixture of the sad and the sweet. You had to keep going, that was all.

Thankful for what? For numerous things, not all of them baked fresh and laid on the table. Among the rooted realities of our vexing time is human freedom and a larger abundance of human good will than we often think exists. It means there's the chance, always, to move from the sad to the sweet in a land blessed by a Creator who chastens those he loves: who won't, in mercy, spare them the emptiness of life lived without challenge, remorse and failure -- these being the great shapers of human achievement. We keep going, somehow, to the next Thanksgiving.