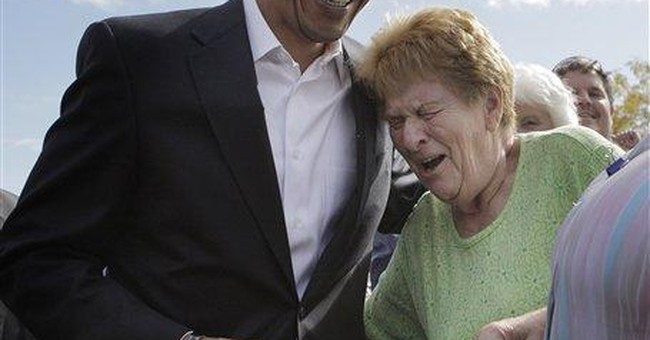 There is, as duly reported, a tide in the affairs of men, and Barack Obama rides it: hardly dampening his dress shoes as he surges toward authority and power.

From John McCain's perspective, it's just one thing after another: losing the Colin Powell endorsement to Obama, watching the Obama campaign take in a record-breaking $150 million in contributions for September, seeing (subliminally at least) 100, 000 turn out in St. Louis to hail The One. A candidate unprepared for discouragement by five-plus years in communist captivity could feel the temptation just to walk away: which is the last thing anyone may expect of John McCain.

It becomes harder every day to envision circumstances in which McCain wins this one. To be sure, you never can tell; but, secretly, you know already. You know you're going to become very, very, very well acquainted over the next few years with Mr. Obama: his rhetoric, his methods of operating, his advisers, his plans, his programs, even his shortcomings.

"Obama" and "shortcomings" are two words radically disassociated this year. You suspect in the nature of things he must have a deficiency or two, but you rarely hear about them, and when you do it's generally in terms of censuring unadvised friendships. Bill Ayers comes to mind. The fates have conspired, in 2008, to blast out of the road any serious obstacles to an Obama coronation, not least Hillary Clinton's fierce ambitions.

It seems to be where we are, like it or not -- and millions love it to death. They've hitched their wagons to this particular political star, and expect to fly upward with him, bathed in strange light. Certain of us old-time political reporters and commentators confess we've never seen the like.

Everything -- especially, perhaps, the timing of the Wall Street disaster -- falls to Obama's advantage. McCain can't catch a break. No one can figure out why this is so, except that it's so. "There is a tide in the affairs of men ... " Shakespeare wrote with dreadful clarity when he put those lines in the expectant mouth of Brutus.

A word that Colin Powell used by way of slapping his new political crony on the back gives a hint. The word is "transformational." Powell thinks a country ready for transformation has met the Transformer.

Of course it depends as Bill Clinton might say, on the meaning of "transformation." To say goodbye to George W. Bush, as so many wish, isn't the same as saying hello to a new kind of America. Was the old, pre-Bush America that bad? Hardly, I would think. An America "transformed" by Obama and his partisans is likely to evidence the same human screwiness that gets us in trouble every few years, or at least once a decade.

That's assuming the transformational powers of The One are up to the job. A decidedly liberal course he would -- make that "will," I suppose -- pursue, because his party's roots, and his own, are over on the left side of the political garden.

It isn't necessary to be a "socialist" to believe in governmental rules, regulations, directions and orders such as characterize life in any overcast, over-regimented nation of losers. Let us say merely that Obama's utterances never ring with the melodies and intonations of human freedom. You don't hear in an Obama speech much acclaim for what Americans have accomplished. What you hear is what we ought to do now.

"Could" was the operative Reaganite-conservative word, i.e., "What if you (not us, the government: you, the investor, the inventor, the plain old worker) put your imagination and opportunities to work, creating something never seen before?"

Neither word says all that needs addressing to a democratic people. But "could," with its redolence of freedom, is more nearly the American way than "should" or "must." If, suddenly, we want a "transformational" change, well, here's the chance to vote for it. But do we really? Do we truly?