Race, Sex and Other Political Irrelevancies 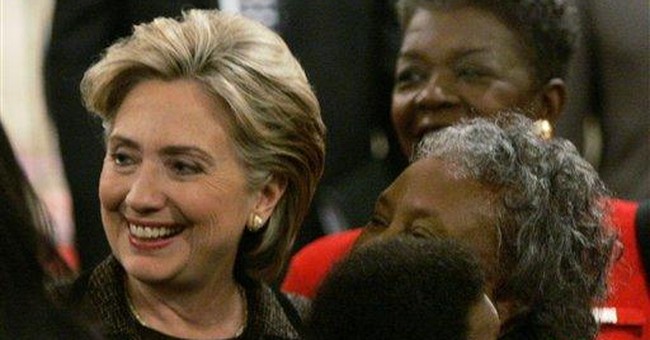 So, why not a woman for president? Why not a black? Why not a sclerotic, left-handed tin-typist from Fargo, N.D. -- so long as the individual in question served our national purposes while displaying the all-too-rare attributes of intelligence, judgment, decisiveness and patriotism?

We were destined to have this conversation once a half-black candidate and a white woman emerged as the leading candidates for the nomination of one of our two major parties. That doesn't make the conservation anything less than -- how about stupid and time wasting?

A conservative friend of mine recently commented, "I'm fine with a black president -- if it's Walter Williams or Thomas Sowell." What he meant was, Give me a candidate who's on the side of liberty, limited government, good judgment in the conduct of public affairs and such like -- and it doesn't make the slightest difference what other attributes that individual possesses. You've got what you need, see? The characteristics necessary (from a conservative standpoint at least) for doing what the country needs to have done.

It probably doesn't hurt that Williams and Sowell -- economists and writers, both of them -- regularly unburden themselves on the topic of how stupid and irksome it is to judge on the basis of race and sex. Isn't that what we are working to get away from -- identity politics? Maybe not. It was certainly an impression one had, based on recent experience with the liberal establishment. Instead, it's the rage among Democrats to assess the Hillary Clinton/Barack Obama encounter in terms of how the black votes falls or which way women are learning. Was Iowa ready for ? Was New Hampshire ? Is Nevada ? South Carolina ? This is analysis of amazing sterility -- like covering elementary school football in The New York Times.

On the basis of our modern habit for sorting out public concerns along interest-group lines, some such analysis makes sense. But not a lot.

You might think we were past this. The implausibility of women and black candidates for president is a tale that lies years in the past. We all know in John F. Kennedy's day that no Democrat (let alone any Republican) would have sat still to hear someone like Hillary unveil her aspirations for America. It would have been: Lady, could you pipe down? We're talking politics over here.

Would America truly countenance the election of a woman president? One doesn't know for sure yet how liberals feel on the subject, in the practical rather than the theoretical sense. I can tell you that for conservatives to fall to their knees in acclamation for a woman candidate, all it would take is a voice and a toughness and a vision akin to that of Lady Thatcher -- our Maggie.

Maggie -- best man in Europe, I once wrote of her, to the exasperation of several readers who found such an appraisal sexist.

No, ma'am. Not sexist in the least. I was endeavoring for propaganda purposes to exalt character and talent above simple biology -- a matter with, I had thought, only marginal relevance to public usefulness. My critics weren't having any of this. Nor -- more interesting yet -- were liberals having much to do with Maggie on any grounds whatever. She was, after all, a conservative, and they weren't, and that was what counted, not sex.

In their own way, Maggie's adversaries, like Secretary of State Condoleeza Rice's these days, were making the point I made earlier: Sex isn't the main criterion. Nor is race. What you believe and what you do is what counts. I would shout back, Yes, you got it! The Maggie-bashers detached themselves wholly from considerations of sex. They didn't like the lady not because she was a lady, rather because she was the wrong kind of lady.

Would that the apostles of identity politics today would accord Hillary's and Barack's critics and foes the same latitude they would claim for themselves were Hillary a Maggie type and Barack a free-market-loving, liberal-whopping Thomas Sowell.

I would not encourage readers to hold their breath while awaiting such a moment of clarity and intellectual honesty.