Biden's Appointees: Diversity But Not Much Else

Betsy McCaughey
|
Posted: Mar 02, 2021 12:01 AM
Share   Tweet
The opinions expressed by columnists are their own and do not necessarily represent the views of Townhall.com. 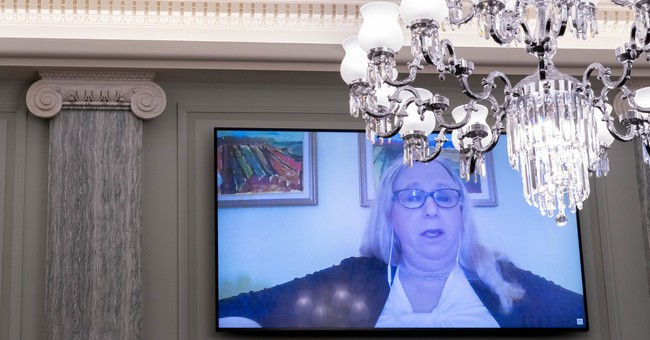 Dr. Rachel Levine's nomination to be assistant secretary of Health and Human Services is being hailed as "historic" by Democrats and the media, solely because Levine is transgender. That's crazy. Her own sexual identity should be irrelevant. What's needed, especially during the pandemic, is competence. Levine lacks it.

As Pennsylvania health secretary, Levine was in charge of the state's COVID-19 response. She told the Senate panel on Thursday that the pandemic was her "urgent and primary focus." What the record shows is that she failed miserably, costing Pennsylvanians their lives.

Pennsylvania ranks a dismal 45 out of the 50 states in COVID-19 case fatality rates, meaning the likelihood that a COVID-19 victim dies, according to Kaiser Family Foundation. The state also lagged most of the nation in testing. Worse, like New York, Pennsylvania ordered nursing homes to admit COVID-infected hospital patients, causing carnage. In the first five months of the pandemic, 70 percent of COVID-19 fatalities in the state were nursing home residents.

Pennsylvania's economy also suffered, thanks to draconian lockdowns. Levine seems oblivious to the economic impact. When she was asked at Thursday's Senate hearing what her state's unemployment rate is, she had no clue. Pretty shocking.

In Pennsylvania, Levine also failed to devise a successful vaccination plan. The fallout from that failure is now becoming apparent. The state ranks 49 out of 50 states in getting vaccines into people's arms.

What was President Joe Biden thinking, elevating her to oversee the federal pandemic response?

Answer: Never mind her record of failure in Pennsylvania, Levine is the darling of the far-left for her transgender activism and advocacy for adolescent gender reassignment.

It's important for the public to be able to get straight answers about Levine's views on these topics before she's confirmed. Among other reasons, Health and Human Services creates and issues guidelines for sex education in schools. Across the nation, states and school districts are already embroiled in controversy over the role of school psychologists and pediatricians in encouraging or "affirming" a child's interest in changing gender, and how to meet children's needs while preserving parents' authority.

Levine has published academic papers advocating giving hormone treatments to 14- to 16-year-olds to develop secondary sex traits like beards for girls transitioning to become male. But when Senator Rand Paul asked her whether she thinks minors are capable of making life-altering decisions about their gender identity, the left erupted in outrage.

Why disgusting? The public has a right to know the views of a nominee whose decisions could affect their family's health care. But instead of answering, Levine regurgitated twice that "transgender medicine is a very complex and nuanced field" and offered to discuss it further with Paul if she is confirmed.

That's not right. Nominees need to be ready to engage with and answer the tough questions. It's not enough to be a "historic" nominee -- the first of a demographic group to fill whatever the job is. Substance matters, and so does competence. That's where Levine comes up short.

Levine also declined to give any real answer to the question on the minds of millions of American parents, when and how to open the schools. Levine isn't the only nominee dodging all meaningful questions.

The politically correct approach to Biden nominees, it appears, is to applaud their place in the human race, stressing whatever racial, ethnic or sexual distinctions they bring to the administration and then expect no more. Senate Republicans questioning Biden's nominee for secretary of the interior, Rep. Deb Haaland, a Native American, were accused of racism for pressing her on issues. Senator John Barrasso, former chairman of the Senate Indian Affairs Committee, said "my constituents deserve straight answers from the potential secretary." He added that "they got very few of those."

The takeaway from Biden's appointments is that diversity is no substitute for competence and straight answers.