Betsy McCaughey
|
Posted: Feb 22, 2017 12:01 AM
Share   Tweet
The opinions expressed by columnists are their own and do not necessarily represent the views of Townhall.com. 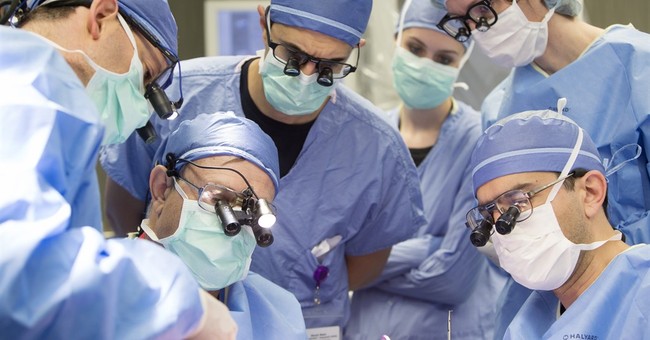 Trending
What's the biggest killer in hospitals? Secrecy. That's the bottom line from the Government Accountability Office and the Food and Drug Administration.

Both report that hospitals are failing to disclose when medical devices injure or kill patients by spreading cancer cells throughout their body or infecting them with superbugs. Federal regulation requires hospitals and doctors to notify the FDA of these "adverse events" immediately, but the regulation is ignored. "There is limited to no reporting" at some hospitals, says an FDA official. When hospitals stay mum, future patients become the victims.

Women with uterine fibroids, for example. More than 70 percent of women over 50 suffer from them. Until recently, as many as 50,000 women a year were treated with a surgical device called a morcellator, even though hospitals already knew or had reason to suspect using the device might spread cancer in women with undetected tumors.

The FDA must approve new medical devices before they are sold in the U.S. But regulators are unable to identify some risks before a device is in wide use. The Trump administration wants the FDA to expedite drug and device approvals -- welcome news for patients with currently untreatable conditions. But expediting approval makes it all the more urgent that physicians and hospitals immediately disclose injuries, as regulations require. The burden is on the medical community to be vigilant and forthcoming.

Earlier reports might have spared Amy Reed, a mother of six, from her constant battle with stage 4 cancer. When she was treated for fibroids in 2013, a morcellator -- a long tube with a spinning blade on the end to shred fibroids -- disturbed and spread the cancer she didn't know she had.

Before Reed's case, the FDA hadn't received reports linking morcellators to cancer, although evidence now suggests there were many earlier incidents. Reed and her husband, both physicians, are driving a national campaign to warn women. The FDA says that hospitals' failure to report adverse events, like Reed's, is the weak link in patient safety.

Now the FDA advises women to be counseled about risks from morcellators and tested for cancer before being treated with the device.

New research also suggests possible infection risks from another commonly used device: scopes used for colonoscopies (examining the colon) and endoscopies (examining the digestive tract) are usually contaminated with bacteria. And this is not just once in a blue moon. It's most of the time, despite rigorous disinfection, according to the American Journal of Infection Control.

These reusable scopes get nicks and scratches and a buildup of biofilm inside. That's a welcome mat for germs.

Another less common device, a duodenoscope, is responsible for infection outbreaks and deaths at numerous hospitals. The scope is threaded down the throat to diagnose and treat digestive problems. A design flaw allows superbugs to cling inside and survive disinfection. These scopes infected dozens of patients in Chicago and Seattle with a deadly superbug beginning in 2012.

Even worse, because the medical community was not alerted, patients at other hospitals were doomed to lose their lives. Doctors at UCLA Medical Center, unaware of the earlier deaths, started using the device, leading to two more fatalities.

In the past, patient advocates have complained that the FDA is too slow to approve new drugs and devices. Patients died because a treatment that could have prolonged their life wasn't approved. So the Trump administration push for cutting bureaucratic barriers is encouraging. On the other hand, medical breakthroughs by definition involve unanticipated problems. That risk can be reduced if hospitals and doctors rapidly report injuries that occur after a device is put into use. To protect lives, patient advocates need to double down on their message to the medical community: Stop the secrecy. It's a killer.