The Grisly History of Chappaquiddick

Ben Shapiro
|
Posted: Apr 04, 2018 12:01 AM
Share   Tweet
The opinions expressed by columnists are their own and do not necessarily represent the views of Townhall.com. 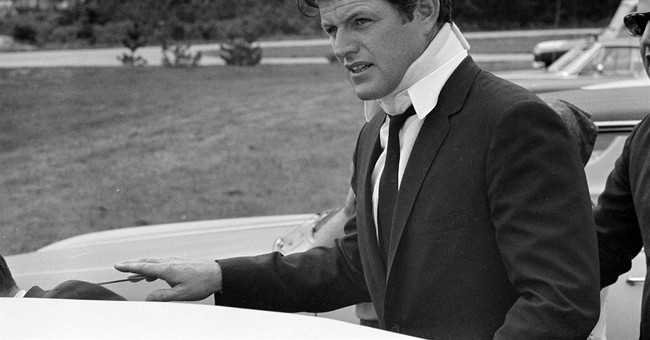 On April 6, a bombshell will hit America's theaters.

That bombshell comes in the form of an understated, well-made, well-acted film called "Chappaquiddick." (Full disclosure: They advertise with my podcast.) The film tells the story of Ted Kennedy's 1969 killing of political aide Mary Jo Kopechne; the Massachusetts Democratic senator drove his car off a bridge and into the Poucha Pond, somehow escaped the overturned vehicle and left Kopechne to drown. She didn't drown, though. Instead, she reportedly suffocated while waiting for help inside an air bubble while Kennedy waited 10 hours to call for help. The Kennedy family and its associated political allies then worked to cover up the incident. In the end, Teddy was sentenced to a two-month suspended jail sentence for leaving the scene of an accident. The incident prevented Kennedy from running for president in 1972 and 1976, though he attempted a run in 1980 against then-President Jimmy Carter, failing.

So, why is the film important?

It's important because it doesn't traffic in rumors and innuendo -- there is no attempt to claim that Kopechne was having an affair with Kennedy, or that she was pregnant with his child. It's important because it doesn't paint Kennedy as a monster but as a deeply flawed and somewhat pathetic scion of a dark and manipulative family. But most of all, it's important for two reasons: It's the first movie to actually tackle a serious Democratic scandal in the history of modern film, and it reminds us that Americans have long been willing to overlook scandal for the sake of political convenience.

First, there's the historic nature of the film. Here is an incomplete list of the films made about George W. Bush's administration since his election in 2000, nearly all of them accusatory in tone: "W," "Fahrenheit 9/11," "Recount," "Fair Game" and "Truth." There has still not been a movie made about former President Bill Clinton's impeachment (though one is apparently in the works). There's been no movie about former President Franklin Delano Roosevelt's internment of the Japanese, former President Lyndon Johnson's dramatic mishandling of the Vietnam War (though we have had two hagiographies of LBJ, one directed by Rob Reiner, the other starring Bryan Cranston) or former President Woodrow Wilson's racism and near fascism.

And it only took nearly 50 years to make a film about a Democratic icon leaving a woman to die in a river. It's amazing it was made in the first place.

Most importantly, though, "Chappaquiddick" reminds us that confirmation bias and wishful thinking aren't unique to one side of the aisle. In the era of President Trump, media members have had fun telling Republicans that they have abandoned all of their moral principles in order to back a man whose agenda they support. But Democrats beat Republicans there by decades: They not only overlooked a man who likely committed manslaughter but also made him into a hero, the "Lion of the Senate." We can't understand how morals and politics have been split in two without reckoning with this history.

"Chappaquiddick" is a must-see. It's just a shame it took half a century for it to see the light.