Bill Clinton Won After All

Ben Shapiro
|
Posted: Nov 29, 2017 12:01 AM
Share   Tweet
The opinions expressed by columnists are their own and do not necessarily represent the views of Townhall.com. 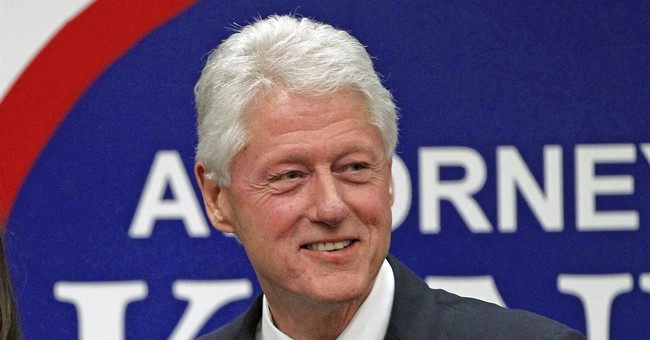 Two weeks ago, it seemed that former President Bill Clinton was finished as a public figure. A variety of public intellectuals on the left had consigned him to the ashtray of history; they'd attested to their newfound faith in his rape accuser Juanita Broaddrick or torn him to shreds for having taken advantage of a young intern, Monica Lewinsky.

The moral goal was obvious: Set up a new intolerance for the sexual abuse of women. The political goal was even more obvious: Show that Democrats are morally superior to Republicans, and in doing so, shame Republicans into staying home rather than voting for Alabama Republican senatorial candidate Roy Moore, who has been credibly accused of sexual assault of minors.

Then it all fell apart.

On Sunday, House Minority Leader Nancy Pelosi, D-Calif. -- the first female speaker of the House -- brushed off Clinton's scandals with a simple one-liner: "Well, I think it's, obviously it is a generational change. But let me say the concern that we had then was that they were impeaching the president of the United States, and for something that had nothing to do with the performance of his duties."

Why would Pelosi defend Clinton? Because she also has to defend Sen. Al Franken, D-Minn., and Rep. John Conyers, D-Mich., both of whom have been accused of sexual harassment or sexual assault. And why would she have to defend either of them?

That's the $64,000 question. She really doesn't -- just as the Democrats never had to defend Clinton. If they'd kept their mouths shut and let Clinton resign, then-Vice President Al Gore would have been president. There's a high likelihood he would have been re-elected in 2000. If the Democrats were to let Franken fall today, his replacement would be appointed by a Democratic governor of Minnesota. If they were to let Conyers go down, he'd be replaced in a special election in what The Cook Political Report deems a D+32 district, meaning it performed an average of 32 points more Democratic than the nation did as a whole in 2016. Democrats wouldn't miss a beat, and they'd have a shot at taking out Moore to boot. By defending Franken and Conyers, Democrats give Republicans ample opportunity to back Moore and point at Democratic hypocrisy all the while. While Republicans can at least point at the potential loss of a Senate seat to justify backing Moore, Democrats wouldn't suffer any loss by dumping Franken and Conyers.

There's only one real reason Pelosi would stand by accused Democrats: She doesn't care. Her logic with regard to Clinton is the only one that matters. He was a Democrat, and his sexual improprieties had nothing to do with his capacity for voting for her agenda. This was the national argument we had in 1998, and it was settled in Clinton's favor. Character doesn't matter. Only agenda does.

In order to shame Republicans, Democrats seemed to buck that agenda this time around. But that was all bluster.

Bill Clinton didn't just escape impeachment in 1998. He won the argument. He taught Americans that no matter how scummy our politicians might be, so long as they side with us on matters great or small, we ought to back them. We ought to back them not because our principles are important but because there might be some point in the future when our principles are at stake, and we don't want our feet held to the fire then, do we?

In the famous play "A Man for All Seasons," Sir Thomas More, betrayed by his former colleague Richard Rich in exchange for the post of attorney general in Wales, says: "Why, Richard, it profits a man nothing to give his soul for the whole world. ... But for Wales?" We're willing to give our souls for nothing. Or perhaps they're already gone.

Here's a Three-Word Policy That's Been Effective in Stopping School Shootings
Matt Vespa
'Sick Son of a Bitch' Beto O'Rourke Crashes Uvalde Press Conference
Spencer Brown
Here's the Only Red Flag We Knew About the Texas Shooter...But It Wouldn't Have Made a Difference
Matt Vespa
And This Is Why NBA Coaches Should Zip It When It Comes to Politics
Matt Vespa
Biden Makes New Push For Gun Control
Katie Pavlich
Texas Shooter Was Known to Police
Katie Pavlich