Ben Shapiro
|
Posted: Jun 08, 2016 12:01 AM
Share   Tweet
The opinions expressed by columnists are their own and do not necessarily represent the views of Townhall.com. 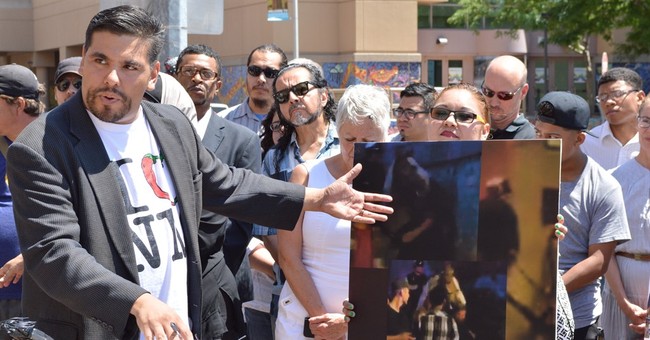 Trending
For years, the left has been desperate to paint conservatives as the real danger to civil society. Back in 2009, the U.S. Department of Homeland Security called conservatives a threat to safety. In a report, it stated that those who oppose abortion and illegal immigration represent a serious domestic terror threat. After presumptive Republican presidential nominee Donald Trump reprehensibly justified violence against protesters, the media was awash with fears that conservatives would suddenly lose their minds and begin brandishing pitchforks in search of unlucky transgender individuals.

But, for decades, the only real threat of mob violence has come from the political left.

The left proved this once again this week when rioters in San Jose, California ignored do-nothing police officers and assaulted Trump supporters after his campaign rally. They overran police barriers, punched random rallygoers and egged a woman. They spit on people, burned American flags and generally made a violent nuisance of themselves.

The left reacted by blaming Trump.

First off, let's point out that while Trump has encouraged his own rallygoers to participate in violence against peaceful protesters, there has never been a pro-Trump mob or riot. Individuals have engaged in bad behavior, but there has never been any mass activity. The same is not true of the political left, which traffics in mob action, from Ferguson, Missouri, to Baltimore, Maryland, to Seattle, Washington, to Occupy Wall Street.

That's what happened in San Jose.

San Jose Mayor Sam Liccardo said, "At some point, Donald Trump needs to take responsibility for the irresponsible behavior of his campaign." San Jose police Chief Eddie Garcia praised his officers for failing to intervene, saying, "We are not an 'occupying force' and cannot reflect the chaotic tactics of protesters." The San Jose Police Department added that it did not intervene so as to not "further (incite) the crowd and produce more violent behavior."

Presumptive Democratic presidential nominee Hillary Clinton blamed Trump, too: "He created an environment in which it seemed to be acceptable for someone running for president to be inciting violence, to be encouraging his supporters. Now we're seeing people who are against him responding in kind." The internet blogging service Vox was forced to suspend editor Emmett Rensin after telling people to "start a riot" if Trump sets foot in their town.

Trump may be a gross thug individually, but conservatives are generally uninterested in the sort of thuggish hordes that roam the streets looking for skulls to crack. We don't like those sorts of folks; we find them an affront to law and order and clean living.

The left has no such compunction. And so long as their leading lights continue to justify such lawlessness in the name of stopping the rhetoric of the right, we're doomed to more broken eggs, broken noses and broken politics.