Notes From a Neo-Nazi Cuckservative

Ben Shapiro
|
Posted: Jun 01, 2016 12:01 AM
Share   Tweet
The opinions expressed by columnists are their own and do not necessarily represent the views of Townhall.com. 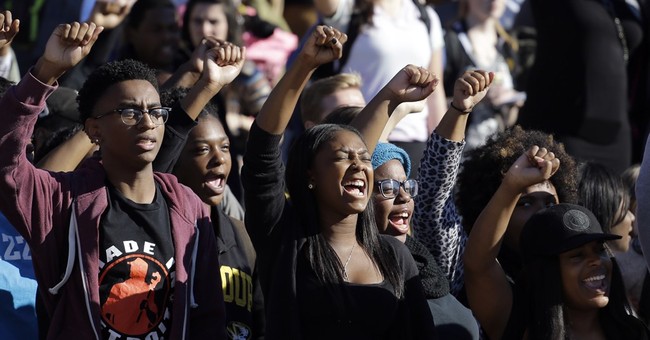 Last week, California State University, Los Angeles held a "healing space" event to provide a safe forum for students and professors to unleash their feelings about my campus speech in February, sponsored by the Young America's Foundation. That speech, you may recall, was originally canceled by university President William Covino. After I decided to go to the campus anyway, hundreds of screaming students blocked doorways, assaulted prospective speechgoers and pulled the fire alarm mid-speech. Professors egged on the protesters; one even threatened student organizers. I was forced to enter through a back door and exit surrounded by a full phalanx of armed and uniformed officers, thanks to the near-riotous conditions outside.

So, naturally, the professors and students who caused the commotion had some hurt feelings.

At their little get-together, Covino announced he "would have never invited anybody like Ben Shapiro" to campus. Covino fretted that "very tragically and unfortunately," somebody like me could show up on campus again. Meanwhile, Professor Melina Abdullah, chair of the university's Pan-African Studies department, said that I had advocated "anti-blackness," and then called me a "neo-Nazi." After realizing that it would be odd to label an Orthodox Jew a "neo-Nazi," she shifted her language slightly, saying, "A neo-KKK member -- let's call him that." She said that students came to her feeling "traumatized" by a speech they probably never heard, feeling "brutalized, physically, emotionally and mentally."

I spent the bulk of my speech talking about how racial diversity was irrelevant -- diversity of viewpoint mattered. This was enough to drive chaos and insanity at the school for months. Apparently, quoting Dr. Martin Luther King Jr. -- which I did during the speech -- makes me a "neo-KKK member."

Meanwhile, David Duke, former Ku Klux Klan grand wizard, has labeled me an enemy of the KKK. I've been hit daily on Twitter by certain alt-right white supremacist Donald Trump supporters labeling me a "cuck" -- a weak-kneed leftist who wants to watch his wife copulate with a black man. Prominent Breitbart News columnist Milo Yiannopoulos tweeted a picture of a black child at me upon my announcement of the birth of my second child. The neo-Nazi Daily Stormer routinely attacks me. Some of Trump's alt-right fans tweeted that I, along with my wife and two children, should be sent to the gas chambers.

This is the toxicity of our extreme politics. The campus left, enthused by Sen. Bernie Sanders and sought by Hillary Clinton, calls anyone who disagrees a "neo-KKK member." The KKK, meanwhile, calls anyone who won't support Donald Trump a "cuck." This is what happens when basic American principles are no longer taught; this is what happens when grievance politics replace the principles of the Declaration of Independence and the Constitution of the United States of America. Speaking in favor of free speech makes you a pariah for those who would control speech in order to build their utopia.

So, what about those of us who despise both the KKK and the Black Lives Matter movement? What about those of us who think that white nationalism is despicable, and that the censorious brutality of the "diversity" clique is gross? We've got a long road ahead of us. We'll have to teach a new generation, from scratch, that freedom and liberty still matter, regardless of race. We'll have to attempt to restore the notion of a social fabric, rather than the tribalism that now dominates the conversation. We'll have to stand tall against authoritarianism from both sides.