The Right Caves on Social Issues, Then Loses 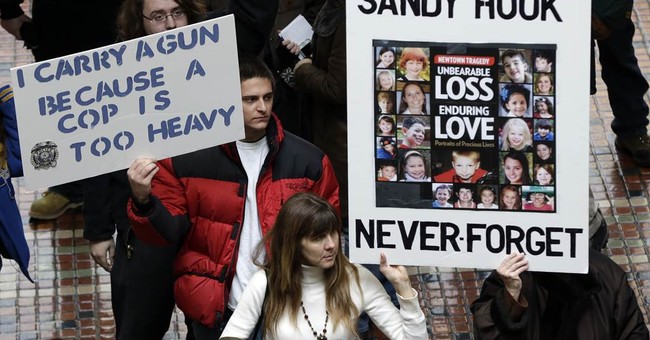 This week, a Wall Street Journal/NBC News poll showed a significant drop in the number of Americans identifying as conservative, and a significant rise in the number of Americans identifying as liberal. As the Journal described, "For the first time since 2010, conservatives are no longer a plurality: 38 percent identify as moderates, compared with 33 percent who identify as conservative and 26 percent as liberal." The Journal, like Gallup, attributes the drop in conservative identification to increased allegiance to leftist social positions, particularly among young people and women.

Predictably enough, the Republican establishment agrees with this analysis. For years, they have been claiming that the only path to national victory stands in de-emphasizing social issues and emphasizing fiscal ones. After all, as they point out, Gallup shows that conservatives beat leftists on economic issues by a margin of 39 percent to 19 percent. If Republicans simply drop social issues altogether, the logic goes, voters will be able to move into the economic realm, where conservatives dominate.

This analysis is dead wrong. It assumes two facts not in evidence: First, that conservatives can successful drop social issues without destroying their own value system and base; second, that leftists will ever allow a consensus on social issues.

First, Republicans cannot dump the value system that underlies conservative thought. Libertarianism is a fine philosophy of government, but a rotten philosophy of life. Without supportive social institutions to back responsible and moral decisions, free societies invariably crumble into the detritus of their own bad decision-making, and then call for the collective to help. Agreeing to an unwritten social contract of self-sufficiency is all well and good, until someone breaks the pact. And in the absence of religious and moral institutions outside government, somebody always breaks the pact.

Second, leftists will never allow a consensus on social issues. The entire goal of the left, in fact, is to promise consensus, then move the goalposts. Like Charlie Brown aiming to kick Lucy's football, conservatives constantly trust that they will be able to reach an accommodation with the social left. Meanwhile, the social left constantly destroys another heretofore well-accepted social consensus in the interest of casting conservatives as unfeeling.

To that end, the social left called for feminism, defining the movement as the ability of women to work freely; the right agreed. The left quickly redefined feminism to include abortion, the labeling of marriage as a patriarchal institution, and the destruction of any traditional notion of biological sex; the right disagreed. The left labeled the right anti-feminist.

Similarly, the social left called for deregulation of sexual activity; the right conceded. The left quickly redefined deregulation to include special legal protections for homosexuality, then moved on to same-sex marriage, and now pushes for legal measures against religious businesses and institutions. When the right disagrees, the left labels the right intolerant and homophobic.

All of this destroys political debate and conversation in order to label the right bigoted and nasty. And the right buys into the asinine idea that should they concede to the latest cause celebre, finally they'll have taken social issues off the table. And so the right goes from loss to loss, constantly bewildered as to why leftists keep winning even though the right keeps moving left on social issues.

The real answer would be to fight. If conservatism rests on certain basic notions of morality, that morality cannot be jettisoned in the quixotic search for electoral majorities. Those electoral majorities will never materialize so long as the right runs from its own values, tacitly conceding to the left the moral high ground.