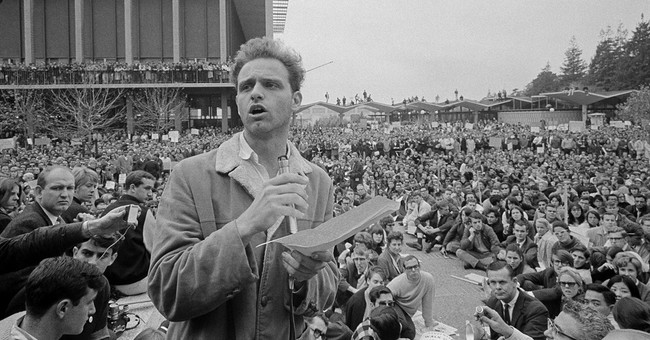 Trending
In 2007, then-Senator Barack Obama signified that he represented a sea-change in the nature of American politics. Obama proclaimed that as a member of the younger generation -- born in 1961, at the tail end of the baby boom -- he no longer wanted to participate in the stale and tired politics of the 1960s. Instead, he wanted to thrust America forward into a "different kind of politics," one beyond the "psychodrama of the baby-boom generation -- a tale rooted in old grudges and revenge plots hatched on a handful of college campuses long ago -- played out on the national stage."

Those politics, at least, had the excuse of an uglier America -- one fresh with the wounds of Jim Crow, the sins of sexism, the controversy of Vietnam. Today's 1960s reruns seem wildly out of context. But that's the point: For the radicals of the 1960s, just as for the establishment Obamaites of today, context simply does not matter. When you are attempting to craft utopia, context is irrelevant -- and human beings become either tools or obstacles toward the creation of that utopia. The vision never changes. Only the calendar does.

And so we're watching racial tensions on a scale unseen since the 1970s play out across America -- with the support of the political establishment. The images of police officers turning their backs on New York Mayor Bill De Blasio mirror the images of officers booing New York Mayor John Lindsay in 1972 at the funeral of Officer Rocco Laurie. The images of rioters burning down Ferguson mirror the images of rioters burning down Detroit in 1967. Never mind that America of 2014 is not the America of 1967 or 1972 -- if Obama and his allies have to recreate that chaotic era to forward their own political ends, they will.

We're watching the foreign policy of the hard-left McGovernites re-establish itself, this time from the Oval Office. The images of Senator Dianne Feinstein, D-Calif., railing against the CIA on the floor of the Senate over the CIA's use of enhanced interrogation techniques mirror the images of Senator Mark Hatfield, R-Ore., railing against the American military in the aftermath of the Winter Soldier hearings of 1971. The images of the Yazidis starving on mountaintops in Iraq mirror the images of Vietnamese rushing onto boats to escape the horrors of the communists in the aftermath of the Vietnam War.

We're watching the divisive domestic politics of the social radicals reassert themselves. The images of failed Texas gubernatorial candidate Wendy Davis standing in pink sneakers to list the glories of late-term abortion mirror the images of Gloria Steinem blathering about "reproductive freedom" in 1971. The images of Nancy Pelosi touting freedom from "job lock" thanks to Obamacare mirror the images of President Johnson effectively doing the same thanks to the war on poverty.

President Obama and his ilk quest for a return to hopier, changier times -- times like the 1960s. And so they will take us all back to the future. Sadly, our future will then be no more than a reversion to insanity of our past.