Bloodguilt Over Jews Leads to Blood Libels Against Jews 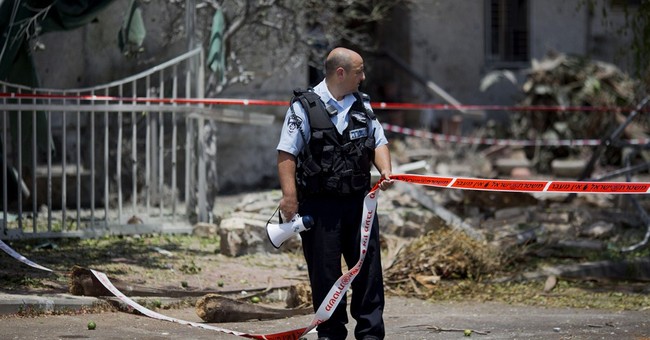 If there's one place on Earth that should understand the danger of Jew hatred, it is Frankfurt, Germany. In 1933, boycotts targeted Jews; by 1938, Germans were burning synagogues down. Between 1933 and 1945, the Jewish population of the city was decimated, dropping from 30,000 to 602. Few Jews, most of them Soviet expatriates, live in the city now.

So Frankfurt seems an odd place for a new blood libel against the Jews. Nonetheless, this week, 2,500 protesters, including Muslims and neo-Nazis -- allied once again -- showed up downtown to scream about Israel's defensive action against Hamas in the Gaza Strip. Police reportedly helped out the protesters, allowing them to utilize a loudspeaker and a vehicle to shout anti-Israel diatribes. "You Jews Are Beasts," read one sign.

Meanwhile, in Paris, Muslims attacked two Jewish synagogues, including one in which 150 Jews had gathered to mourn the deaths of three Jewish boys who were murdered by Hamas operatives. Those Muslims, brandishing bats and chairs, attempted to break into the synagogue and ended up injuring several Jews. In recent years, thousands of Jews from France have emigrated to Israel, amid shocking reports of beatings, stabbings and an ax attack.

The Europeans, it seems, are becoming increasingly comfortable with old-fashioned Jew hatred in their midst, whether homegrown or imported.

There's a reason for that. In much of Europe, bloodguilt over the Holocaust still hangs over the heads of the population. According to a 2012 Anti-Defamation League survey of European countries, 45 percent of Austrians, 35 percent of French, 43 percent of Germans, 63 percent of Hungarians and 53 percent of Polish citizens felt that it was "probably true" that "Jews still talk too much about what happened to them in the Holocaust." Many of those who wish to move beyond the Holocaust, therefore, look for a rationale to relieve national guilt -- and what better way to relieve national guilt than to label the Jewish State an aggressor? After all, if the Jews have become the villains, then why spend too much time thinking about their victimization?

Of course, the labeling of Jews as bloodthirsty villains led to the Holocaust in the first place. Adolf Hitler saw the Jews as bloodsuckers driven by greed and dual loyalty. So did much of the rest of Europe. In the minds of those who murdered Jews en masse, Jews had it coming, because, in the words of Hitler: "The struggle for world domination will be fought entirely between us -- between Germans and Jews. All else is facade and illusion."

Those who today label Israel the font of all evil use Hitler's rationale to relieve guilt over Hitler. That's why the same protesters in Frankfurt threatening Jews carried posters comparing Israel to the Nazis: If Jews are the new Nazis, fighting the Jews becomes an obligation.

Every Passover, Jews recite a paragraph: "in every generation they rise against us to destroy us; and the Holy One, blessed be He, saves us from their hand!" The names change, but the rationale does not. And the God of Israel is always watching, even if those who attack the Jews have convinced themselves that He will turn a blind eye.