Obama Wags the Dog with the Obama Intifada 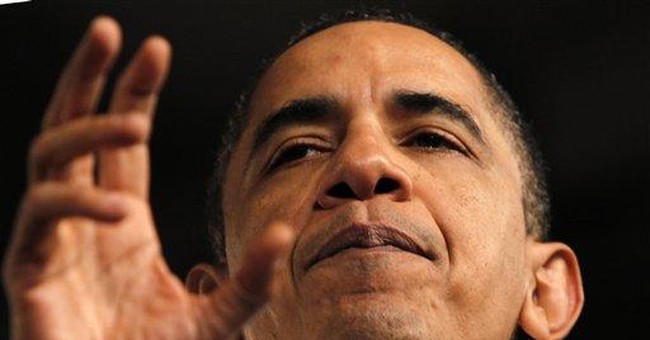 President Obama's health care plan is swirling the drain. Americans don't like it -- the latest Rasmussen poll has just 43 percent of Americans in favor, with 53 percent opposed -- and that dislike has the Obama administration suggesting that polls don't actually mirror the will of the American people. "They're waiting for us to act," Obama told a crowd in Ohio on Monday. "They don't want us reading polls. They want us to look and see what is the best thing for America." This is paternalism of the highest order -- he knows what's better for us than we do ourselves.

So, what's a failed president to do?

How about distract the American public by throwing an ally under the bus and starting a war in the Middle East?

When President Clinton was unhappy about the burgeoning Lewinsky scandal, he wagged the dog by hurling missiles at targets in Afghanistan and Sudan. At least those were legitimate targets.

When President Obama is unhappy about his inability to convince Americans to nationalize health care, he incentivizes Palestinian Arabs to violent uprising.

Supposedly, the latest Obama administration anti-Israel campaign is a response to the Israeli government's decision to green light 1,600 new housing units for Jews in East Jerusalem. Don't believe it for a second. East Jerusalem is sovereign Israeli territory, and Israel has built housing for Jews there for the better part of four decades. Prime Minister Benjamin Netanyahu has repeatedly stated that construction in Jerusalem would not stop. There is nothing new here that should have shocked the Obama administration.

Yet not only did this decision supposedly shock the Obama administration, it also led virtually the entire Obama cabinet to speak out against Israel. Joe Biden, who was in Israel when the decision was made by Israel, ripped Israel for undermining "trust" -- whatever that means in a situation where one side's trust entails denying the existence of the other side. Secretary of State Hillary Clinton said the United States was "insulted" by Israel's decision, a vomitricious statement that arrogantly assumes that Israel's construction policies must be geared toward pleasing the Obama administration. George Mitchell, the simpering "special envoy for Middle East peace," cancelled a trip to Israel to show his displeasure.

Make no mistake -- the timing of the latest Obama-Israel spat is purposeful on the Obama administration's part. This response was far too well-rehearsed for it to have been triggered by something equivalent to a Housing and Urban Development dispute in the United States. You would think that Biden, the presiding officer of the Senate, would be useful during a health care debate. You would think that Obama could send Mitchell or Hillary or someone remotely qualified on Middle Eastern politics. But that's not what Obama wanted. Obama sent Biden to Israel on March 8, even as the House and Senate looked for a way to ram through the health care bill, because he wanted Biden's visit to trigger headlines.

And trigger headlines it did. Obama has been pressing Israel since his inauguration to concede to Palestinian Arab terrorists; he even sent his Jewish "Benedict Arnold" Chief of Staff Rahm Emanuel to the American Israel Public Affairs Committee annual conference last year to inform Jews that if they didn't appease Palestinian Arab terrorists, the Obama administration would allow Iran to go nuclear. The Obama administration's anti-Israel ire is nothing new.

What is new is the level of the Obama administration's rhetoric, which has brought American-Israeli relations to the lowest point since 1956. Even as the Obama administration condemned Israel for supposedly stalling the Orwellian "peace process," Palestinian Arabs were rioting in a Hamas-sponsored "day of rage" to protest the reopening of a Jerusalem synagogue ripped down by Arabs in 1948. The synagogue is located in the Jewish Quarter of the Old City of Jerusalem, sovereign Israeli territory by any estimation. Yet we have not heard a peep from the Obama administration about the Arab riots over their wish to establish Judenrein in Jewish Jerusalem proper.

On Tuesday, hundreds of Arabs throughout Jerusalem burned tires and threw rocks at border guards. An Israeli policeman was shot in East Jerusalem. What do we hear from the Obama administration? Silence. This is the Obama Intifada. It is he who has suggested that the Palestinian Arabs have legitimate grievances, that Israel is the victimizer, and that the United States will stand aside and allow violent atrocities by Arabs to go forward without comment. He wants this Intifada, and he's got it.

The Obama Intifada will serve a dual purpose: it will knock health care off the front pages, and it will provide a "crisis" for Obama to solve. If a few Jews get killed, Obama doesn't truly care. What's a few eggs if you're frying up a socialized health care omelet? What's a few Jews if you can win another Nobel Peace Prize?

Nothing, to President Obama. All that matters is his personal victory, even if America and her allies lose.