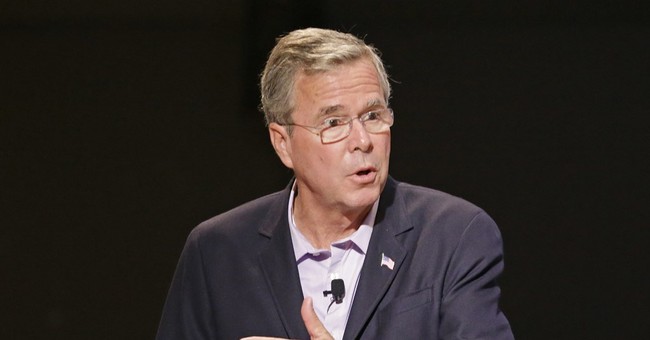 Last week, yet another undercover video emerged, showing the barbarity of abortion. A Planned Parenthood employee casually mentions that sometimes babies are born alive before their "abortion," and that she can "usually see the whole brain...come out" during the process of harvesting and selling fetal organs.

Jeb Bush tweeted that the first video of the series was "shocking and horrific." Yet for nearly five years, Jeb was director of a philanthropy that partnered with Planned Parenthood to weaken abortion laws around the world.

From March 2010 until the end of 2014, Jeb Bush sat on the board of the Bloomberg Family Foundation, founded by former New York City Mayor Michael Bloomberg.

Last March, Bloomberg Philanthropies announced a $50 million campaign to expand “reproductive health” for women, partnering with none other than Planned Parenthood.

Planned Parenthood, he explained, would use the grant to train local activists in four nations to "push for less restrictive abortion laws and more government funding for" abortion “services.”

In one of those nations – where abortion is currently legal only to save the mother's life - the International Planned Parenthood Federation announced it will pursue its “ultimate goal of unrestricted access” to “free” abortion.

Bloomberg Philanthropies also split $2 million in grants between two African abortion providers: EngenderHealth and Marie Stopes International in Tanzania. The latter has admitted it performs "illegal abortions all over the world."

It is important to remember that the ghoulish trafficking captured on today's video took place, not in some underdeveloped failed state, but in the United States of America, the nation with the strongest consent laws and regulations on earth. Abortion practices in the developing world would be more “shocking and horrific” yet.

If Bush regrets this aspect of his role as a foundation director, he has not said so. His spokeswoman, Kristy Campbell, said that the foundation "does a lot of good work across the world" and that "as a board member, Governor Bush did not vote on or approve individual projects or programs.”

That seems an awfully weak response. By definition, a trustee is entrusted with exercising “an advisory and oversight capacity” and is held “ultimately accountable” for his stewardship.

As of this writing, the campaign has not yet responded to my queries about Gov. Bush's participation in the charity's collaboration with Planned Parenthood.

None of this is to question Bush's record as a pro-life governor in Florida where he intervened in the Terri Schiavo case, signed a parental consent law, and allowed state regulation of abortion facilities. But pro-life voters must question how important the issue is to him if he is willing to serve on a board whose founder has been an outspoken advocate of abortion-on-demand.

To be clear, it was certainly not abortion that drew Jeb and Bloomberg into a nearly decade-long friendship but education policy – which is less than reassuring.

Bloomberg has funneled his billions into advancing the Common Core curriculum, calling parental rejection of the mind-numbing standards “a disgrace” and “sick.” Bush has doubled down on his support of the controversial, top-down standards time and again.

At a minimum, serving on the Bloomberg Philanthropies board shows that he felt promotion of Common Core - and his association with Bloomberg - outweighed concerns over advancing abortion advocacy worldwide.

That is, Jeb Bush was so committed to foisting Common Core on parents that he was willing to sit on the board of an organization that funds abortion providers and pro-choice activists in order to achieve that goal.

And that raises questions what his priorities would be in a third Bush administration.

So, too, does his popularity among Republican – and Democratic – megadonors, his unflagging support for amnesty, and his seeming disconnect from the party's grassroots.

In a crowd of 17 Republicans, primary voters can afford to be selective - as selective as Mayor Bloomberg is in giving his support. He told Planned Parenthood, "The things that are high on my priority list are sensible gun laws,” “a woman's right to choose,” and “gay rights."

He added that "we need a good immigration bill" that provides amnesty for an estimated 11 million illegal immigrants, "so we can continue our economy."

Despite saying he would not support candidates who do not toe the line on those issues, Bloomberg remains enthused about Jeb. “I couldn’t agree more with this guy,” he gushed in 2010. “If there’s anyone I would want on my side waging all those important battles and helping provide the government Americans deserve, it is our next speaker."

Republican voters may ask if Bloomberg will one day be waging his policy wars from a White House controlled by their own party.