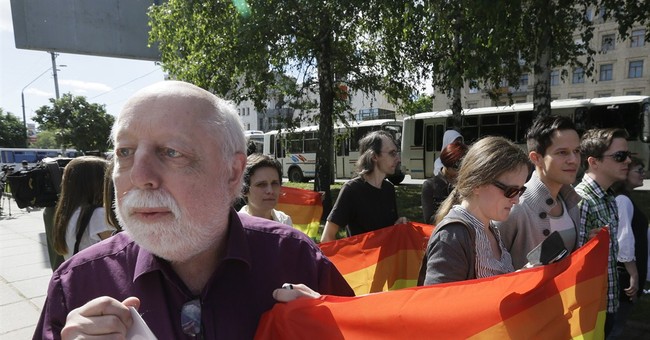 It’s being heralded as a huge advancement for the cause of “civil rights.” But a controversial new bill in California has very little to do with children, yet has a whole lot to do with the selfish interests of the state’s government employees.

It’s frequently referred to as the “California Transgender Bathroom Rights Bill,” and assuming that Governor Jerry Brown signs it in to law, it will require public K-12 schools throughout the state to let students choose which restrooms they use and which school teams they join based on their gender identity, rather than relying on their physiological gender. Reaching far beyond the matter of which restroom a student uses at school, the bill quite intentionally would require schools to allow students "to participate in sex-segregated programs, activities and facilities" based on their self-perception, and to ignore the gender that is designated on a student’s birth certificate.

The new policy will likely draw a backlash, and most of the criticism will likely rest on historic notions of morality and normative behavior. “I don’t want teenage males mingling with my daughter in the locker room” some might say. But too bad – the oppression of heterosexual presumption has been blight on western civilization throughout its history, and now the enlightened politicians of California are finally ridding us of this problem. Californians who aren’t so enlightened and who are stuck in their antiquated hetero-centric thought processes will just have to make some adjustments.

But not everybody in California will “adjust” easily. In fact it is likely that some, perhaps even many local school districts around the state will sue the state to prevent the law’s implementation. And this is where the so-called “civil rights” bill will begin to serve the selfish interests of government employees.

When the law suits get filed, the California Attorney General’s office will as a matter of procedure have to defend the state law in court. This creates more “work” for the attorneys and assistants that already work at the AG’s office, and may even necessitate the hiring of additional staff – all of which is funded with people’s tax dollars.

And who do you suppose does the preparation and filing of the law suits? The staff legal counsel at the school district, of course. But how many local public school districts have a litigation attorney on staff? More customarily a public school district will have an attorney on staff to advise the school board on how to stay out of litigation, and not for the purposes of filing lawsuits. School districts may need to hire more attorneys or perhaps contract with outside attorneys in order to fight the legislature’s enlightenment –and once again this would happen at the expense of taxpayers.

But what about retro-fitting school facilities to accommodate the new law? Certainly the “boys” and “girls” signs that appear on restrooms and locker rooms will need to be removed. And why should any student who feels like they have a “female identity” have to look at a standup urinal every time they walk in to their restroom of choice? The “civil rights” law will no doubt create lots of “work” for facilities construction and maintenance personnel at school districts, all at taxpayer expense.

And let’s not forget about the practical, emotional and psychological needs that the new law will create. Students and school personnel alike will presumably need special training and counseling so as to know how to make adjustments, and how to more effectively accommodate those with gender identities that are different from their physical gender. One could imagine that teachers’ unions might wish to lobby school districts for “extra funding” so teachers can get properly trained in the ways of gender identity issues. And perhaps California’s two government-run university systems – the California State University (“CSU”) system, and the University of California (“UC”) system – will need to develop new curriculum and coursework so as to properly train future teachers on how to create more “gender neutral” environments in public schools. Once again the taxpayers of the Golden State will shoulder the financial burden, as government employees go about their new and all-important “work.”

All of these various adjustments to be made in the name of “tolerance” and “diversity” add up to the same thing – an expanded “need” for government workers, an expanded government bureaucracy, and more consumption of private people’s money. It’s great news for those whose livelihoods are vested in growing the size and scope of government, but really sad news for people who work in the private sector and who still actually care about their liberty.