Brussels and Iraq: Battlegrounds in the Terrorists' Global War

Austin Bay
|
Posted: Mar 23, 2016 12:01 AM
Share   Tweet
The opinions expressed by columnists are their own and do not necessarily represent the views of Townhall.com. 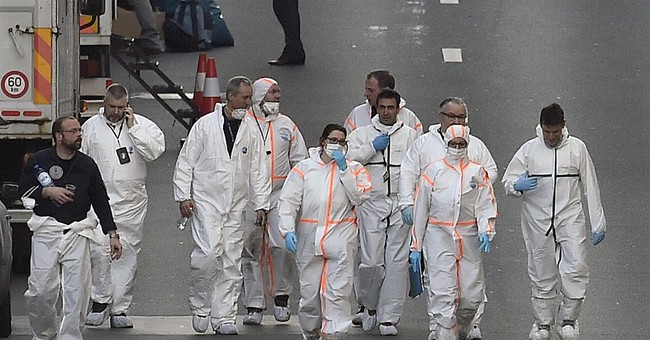 The Islamist terrorists' global war on the civilized continues unabated with Brussels, Belgium the latest target of an ISIS mass homicide.

This Brussels attack lacked the strategic magnitude of 9-11. Its death toll is well below the 131 murdered in Paris in November 2015. The Paris slaughter was Europe's most deadly terror attack in a decade.

However, the Brussels assault was executed with the same fanaticism and audacity we witnessed on 9-11 and saw again in Paris. Several dozen other Islamist terrorist mass homicides around the globe have been equally audacious and cold-blooded. The November 2008 massacre-by-gunfire in Mumbai, India, left 164 people dead and over 300 wounded. Al-Qaida's March 11, 2004 (3-11) slaughter in Madrid murdered 191 Spaniards and wounded 1,800. It affected Spain's national elections and brought "Socialist peace candidate" Jose Luis Rodriguez Zapatero to power. He immediately withdrew Spain's troop contingent from Iraq. Zapatero certainly secured peace with al-Qaida, didn't he?

Based on official statements, the Brussels attacks were well organized and planned. The metro train station was near the European Union's administrative office. ISIS sent EU bureaucrats a message: we intend to kill you.

Perhaps revenge was a motive. However, radical Islamists are seeking revenge for the loss of Spain in 1492, a fact that apparently escaped Prime Minister Zapatero's strategic notice.

I suspect ISIL terrorists had already planned the attacks and accelerated their time table after security officers claimed Abdeslam was "worth his weight in gold" as a source of information on ISIS and its terror operations.

French and Belgian government officials wanted to announce Abdeslam's capture. Paris was a horror. However, intelligence officers usually advise minimizing news of a capture until they have finished interrogating the terrorist and run checks to gauge the accuracy of any information the terrorist provided.

A sophisticated organization like ISIS will know a raid occurred. Neighbors talk. So officials say a suspect was arrested, then shut up and let the enemy worry.

Which is why publicly gloating about Abdeslam's motor mouth strikes me as a grievous mistake. It tells ISIS terror cells to run, go to ground or quickly execute planned operations. In the counter-terror business unforced errors caused by myopic political considerations or lack of professional discipline often exact a price paid in the loss of more innocent lives.

That noted, the Paris attack seems to have been a sobering political watershed. French and Belgian governments now acknowledge the obvious: Islamist terrorists are waging war against them.

Since the Paris bloodletting, Western European security forces have become noticeably aggressive. French and Belgian police have conducted several raids where suspected ISIS terrorists were either killed or arrested, and done so with enough frequency to indicate intelligence services have identified ISIS support networks in France, Belgium and Holland.

Police have been quick to execute follow-up operations. French authorities reported that four people -- duly described as radical Islamists -- were arrested March 16 for allegedly helping plot the Paris attack. The arrests followed a police raid on a house in Brussels in which two terror suspects were slain.

The war against ISIS, however, won't be won by police forces. ISIS must be defeated in Syria and Iraq. Yes, in the Middle East -- that battleground from which Spain withdrew in 2004. The U.S. withdrew its forces in 2011. Last week ISIS forces killed a U.S. Marine in Iraq. To defend Brussels and New York, U.S. ground forces must go back.