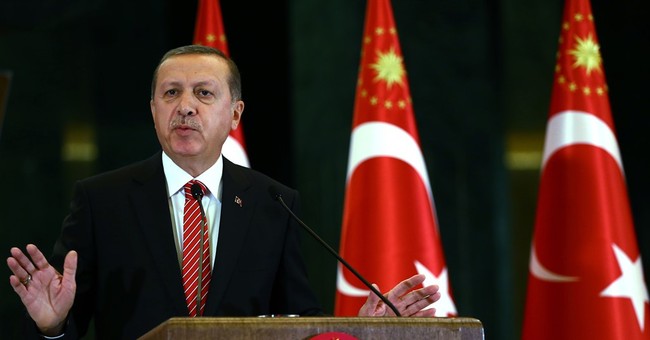 Both incidents are serious, both involve U.S. NATO allies and both have already produced chain reaction political consequences.

Review the headlines. On Nov. 13, NATO member France suffered a devastating terror attack by terrorists connected to an enemy organization, which claims it is a state. France has mulled invoking NATO Article 5.

On Nov. 24, NATO member Turkey shot down a Russian SU-24 fighter-bomber that had violated its air space. In response, Moscow ordered a Russian Navy guided missile cruiser positioned off the Syrian coast to destroy any perceived threat to Russian military operations and personnel. The cruiser given this hair-trigger order carries anti-aircraft missiles that can hit targets 150 kilometers in the distance -- in other words, over Turkey.

Turkey asserted that its forces warned the Russian jet 10 times in a five-minute period that it would be fired upon. However, the Russian plane ignored the warnings and violated sovereign Turkish territory. Turkey called a NATO-wide meeting to discuss the incident -- with Article 5 once again on the table.

Turkish officials added that the Russians were not targeting Islamic State in the Levant fighters. The plans attacked Syrian Turkmen who oppose Syria's Assad dictatorship. The dictatorship is a Kremlin ally. Turkmen are a Turkic ethnic minority group. Turkey defends Turkmen rights throughout the region.

Article 5 of NATO 's founding treaty has a nickname with a French literary connection: The Three Musketeers clause. One for all and all for one, Alexandre Dumas' dashing soldiers promised one another. Article 5 says "that an armed attack against one or more of them ... shall be considered an attack against them all."

Article 5, however, does not absolutely commit an ally to military action. The treaty says each member, following Article 5 invocation, may take "action as it deems necessary, including the use of armed force, to restore and maintain" alliance security. To trigger Article 5, the enemy had to attack a member's territory or member "forces, vessels or aircraft" operating "in or over" NATO territory.

Article 5 has been invoked just once: the day after al-Qaida's 9/11 attacks on the U.S.

In the wake of French President Francois Hollande's declaration that the Paris slaughter was an act of war, several Canadian media outlets asked if this meant Canada must commit military forces to fight ISIL. The answer is no, not necessarily. However, Canada does have a small air contingent participating in the U.S.-led anti-ISIL coalition. The new Canadian government has indicated it may withdraw this force.

Which segues to the Turkish-Russian incident. NATO allies are expected to provide a diplomatic and political response to a threatened ally, even if Article 5 isn't invoked. Recent NATO statements supporting Turkey demonstrate that commitment.

But perceptions matter, particularly when Russian President Vladimir Putin has made degrading NATO a foreign policy goal. Though this Turkish incident does not officially connect to the U.S. anti-ISIL coalition, Canada might consider delaying its military withdrawal from anti-ISIL operations lest it be perceived as undermining Turkey and alliance solidarity.

With Putin as an adversary, solidarity matters. Turkey is just the latest flagrant victim of Russian military probes that have been increasing since 2008, the year of the Russo-Georgia War. They intensified in 2014 after Russia invaded Crimea, annexed it and then launched a slow war of aggression against Ukraine.

Perhaps the most spectacular probe was the Russian "bluff" attack on Denmark's Bornholm Island in June of 2014. That probe mimicked Soviet Cold War "tests" of Danish and Norwegian air defenses. The military threat had a diplomatic goal: shake Denmark's support for Ukraine.

This incident -- and scores like it -- inform this recent press statement by NATO Secretary General Jens Stoltenberg: "I have previously expressed my concern about the implications of the military actions of the Russian Federation close to NATO's borders." The shoot-down "...highlights the importance of having and respecting arrangements to avoid such incidents in the future."