Turkey and Syria: From Bluff to Buffer 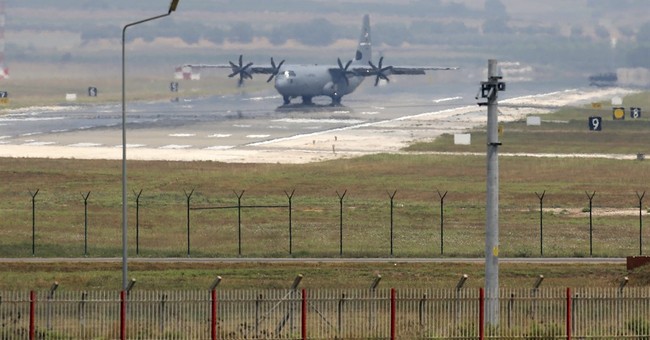 After suffering two recent attacks by terrorists based in Syria, Turkey has ordered its military forces to prepare to enter Syria en masse and establish a "buffer zone." Turkey, seeking NATO-wide diplomatic affirmation for this risk-ridden decision, then demanded a NATO Article 4 consultation.

Almost four years ago, Turkey publicly mulled a buffer zone to contain Syria's Arab Spring chaos and protect refugees streaming north to Turkish safe havens. The Ankara government vocally contemplated military action to establish and enforce the zone, with the implicit goal of toppling the Assad dictatorship. Ankara said Bashar al-Assad had to go. When Syrian forces fired across the border in April 2012, Turkish forces returned fire, and Ankara talked tough. Turkey threatened NATO Article 5 action, the war clause that commits NATO members to aid an ally who has suffered territorial attack. However, Ankara only did the talk, not the walk.

Turkey feared reckless action might ignite regional political "crumbling" and incite ethno-sectarian bloodbaths. Though the Obama administration had called on Assad "to step aside," Ankara suspected Washington's support for military action was shallow.

But last year the Islamic State in the Levant (ISIL), arguably taking advantage of Turkish and U.S. dithering, crumbled eastern Syria and spilled into Iraq while committing heinous ethno-sectarian bloodbaths. The Obama administration declared war on ISIL -- a sporadic war, but still a war.

For decades, the PKK has waged an on-and-off secessionist war. Many Turks -- including ethnically Kurdish Turks -- dismiss the PKK as a Marxist gang of killers and drug smugglers. Kurdish demands for ethnic rights, however, are real and substantial. Ankara's 3-year-old PKK peace initiative recognized that. But the peace process has floundered, and this latest attack may have killed it.

Ironically, most of the Suruc victims were Turkish Kurds soliciting aid to rebuild the Syrian Kurd town of Khobane. Syrian Kurds drove ISIL from the town earlier this year, but the battles left it in ruins.

Responding to public anger, Turkish aircraft bombed suspected terrorist camps, and the government pulled the NATO card. Think of Article 4 as a diplomatic show of force that NATO members may invoke when their national security or territory is threatened. The consultation photo-op shows aggressors that the alliance member has friends with economic resources and world-class military forces.

In Brussels, NATO ambassadors said they "stand in strong solidarity with Turkey" and pledged strong support for Turkey's decision to attack terrorist targets.

The official promise, however, did not mention ISIL or the PKK. Employing diplo-speak, the NATO officials deplored "terrorism in all its forms and manifestations."

Though allied support for Turkish action is sincere, the diplo-speak reveals differing goals with regard to ethnic Kurds. Alliance members insist that Turkey continue the PKK peace project and not discard the progress made.

The military questions vis-a-vis the buffer zone are how soon and precisely where Turkish ground forces will enter Syria, how far they will penetrate Syrian territory and how long they will stay. Turkey got NATO's explicit support for that. The U.S. wants an ISIL-free buffer zone. Kurds are anti-ISIL allies in Syria and Iraq, and so far are the most reliable.

Turkey, however, will not permit the creation of a separate Kurdish state. Period. Western diplomats worry that Turkey could focus buffer zone operations on PKK supporters to the detriment of defeating ISIL.

Conflict over Kurdish issues is one of the complex challenges Turkey must overcome or finesse to secure longer-term physical security and political stability internally, as well as along the Syrian and Iraqi borders.