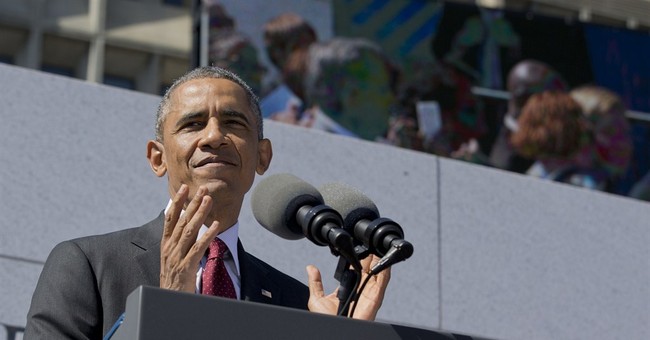 Trending
According to former Secretary of Defense Leon Panetta, a frustrated President Barack Obama has given up on leading. World events refuse to break his way. Commentator Dan Balz opined on Hugh Hewitt's radio program that the Ebola epidemic reflects "this notion" that global events are spinning out of control."

Yeats, in his post-WWI poem "The Second Coming," wrote, "Things fall apart; the centre cannot hold; Mere anarchy is loosed upon the world."

Yes, we have lived this before, with better leaders and ennobling eloquence.

2014's stressed and spinning might think on the debilitating setbacks, disappointments and bloody disasters the WWII Western Allies confronted in late September and October 1944.

Comparing the strategic map of Oct. 1,1944, with that of June 15, 1944, reveals an astonishing string of Allied successes in Europe and the Pacific Saipan cost lives. Leaping 1200 miles from advanced bases, on June 15, U.S. forces assaulted Saipan. Despite fierce Japanese resistance, the island fell in three weeks. The U.S. had put a huge crack in Japan's "inner-ring" defense. Saipan's loss played a major role in the fall of Japanese premier Tojo and his cabinet.

However, the July breakthrough and George Patton's August race around the retreating German Army radically altered the European map. In those heady days, Patton thought he might drive straight into Germany. The Saarland, however, has some tough terrain. The British favored a direct attack to the North German Plain. That is the seed of Operation Market Garden -- using paratroopers to seize bridges, and then pushing allied tanks into Germany and pointing them toward Berlin.

However, British paras landed on panzer divisions and were slaughtered. American airborne also suffered high casualties. The war in Western Europe would not end by Christmas.

Hunt's narrative is short but gripping. Its three-part structure suggests a musical form, a sonata perhaps. Hunt, a Life Magazine writer prior to the war, certainly had the literary skill. Military whimsy of the Readers Digest "Humor in Uniform" ilk pervades part one, Before Landing. In part two, Landing, terse prose depicts the collapse of careful planning, military pride and hope into minute-by-minute combat terror, dread and bloodbath.

Despite the U.S. victory, achieved by perseverance, heroic leadership and stoic commitment, melancholy braced by earned wisdom marks After Landing.

The last section has a T.S. Eliot feel, "Gerontion's" haunting line, "After such knowledge what forgiveness?" After scarring experience, how do you bear it and what do you do?

If you were a 1944 U.S. Marine in the Pacific, what you did was go on and assault the next island. As for bearing it, Captain Hunt would tell you the living have that luxury. 2014's fretters need to get on with it.