The War in Chicago? 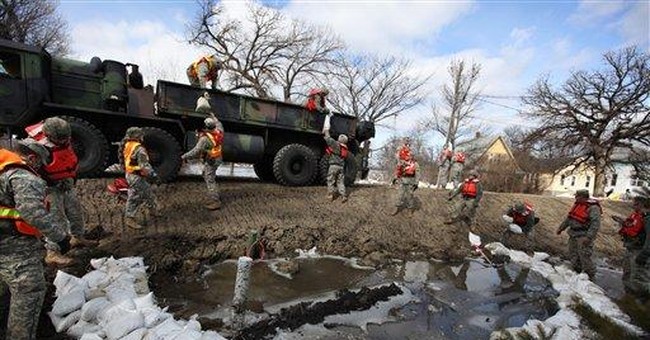 Call out the National Guard to stop urban gangs?

Fritchey's molten rhetoric provides the sketch: "As we speak, National Guard members are working side-by-side with our troops to fight a war halfway around the world. ... We have another war that is just as deadly taking place right in our backyard."

Fritchey's first glitch is rather revealing: National Guard servicemen and women are troops, and definitely our troops -- a reserve of trained soldiers able to fight in their own units or augment U.S. regular forces. His second glitch, conflating Afghan combat with Chicago street crime, exceeds political hyperbole and enters the realm of blockheaded ignorance.

A National Guard squad rolling into an inner-city Chicago neighborhood can establish "presence" -- and presence can serve a deterrent function. A policeman on a beat establishes presence. Here's the concept: When the cop drives by or stands on the corner, rational thugs scatter and look for easier targets.

However, unlike experienced street policemen who know neighborhoods and are trained to defuse conflicts and arrest criminals, 20-year-old riflemen --whether National Guard or Regular Army -- are trained to shoot to kill. Military Police (MPs) are a hybrid, but MPs are also first and foremost combat soldiers.

Consider these questions and the operational issues they raise: What will be the rules regarding use of force guiding these young American soldiers as they patrol your city? Do you intend to provide the soldiers with ammunition? In domestic situations, the Guard has deployed soldiers without ammunition, to avoid the use of lethal force, though this is increasingly rare post-9-11 (besides, soldiers without ammo can be robbed of their military equipment by gang members). Or do you intend to really lock down the city and declare martial law (since we hear rumors that some gangs have assault rifles)?

Will there be special vehicle and pedestrian checkpoint procedures, or in the name of fairness and to pre-empt charges of profiling, will the Guard be expected to stop and inspect every person and every vehicle entering threatened neighborhoods? Do you intend to give the soldiers crash courses in arrest procedures, or the gathering and protection of evidence?

And back to the gangs: Have you thought at all about how local gangs might react? The presence of armed soldiers may inhibit some crimes, but up-and-coming gang leaders seeking macho street cred may see soldiers as enticing targets guaranteeing big headlines. Unlike the Chicago cops, the Guard won't be around forever -- unless Fritchy and Ford want a permanent garrison force.

Guard units are trained to handle a range of assignments. Supporting and augmenting local police forces in crises like natural disasters or riots are Guard missions.

Do Chicago police face a crisis of violence, or is this a case of rhetorical overreach and grandstanding?

"Every year we struggle with March and April. There's a spike (in violence) when the first hot days come," Hardiman told the paper. He also noted violence in Chicago has dropped over the last couple of decades and added, "Right now, what is lacking in the city is that people involved in violence prevention need to collaborate better."

His comment suggests the problem is ineffective local leadership, especially in the districts experiencing a spike in violent crime. In this light, calling for the National Guard is a request for state intervention. A cynic might conclude it's a way to get state taxpayers to foot Chicago's police bill.