He has spoken in front of the National Press Club, testified in front of the House Judiciary Committee, has addressed The Heritage Foundation and is a frequent speaker and crowd-rouser for the New York State Conservative Party. He is an acclaimed public speaker, inspiring diverse audiences.

He has been invited to inform policy-makers, candidates, and elected officials in the halls of Congress, and in the Executive, regarding the moral and religious dimensions of policies and legislation that are being pondered.

In the mid-1990s he founded a conservative think-tank of black and Jewish political conservatives. During his career, he has led congregations in the Midwest, South and Northeast. He was the first rabbi to endorse Ronald Reagan for President in public newspaper ads around the country.

He hosted a nightly program on Rightalk, and is known for his lively and thought-provoking "One Minute Commentaries" on N.Y.C. radio. Previously, he hosted “Talking Sense,” a radio show heard on WWDJ, WSNR and WEVD in the New York metropolitan region. 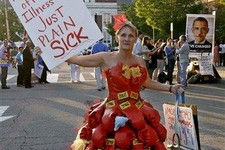