The 'Poor Illegal' Media Narrative and Why It's Not Working

Arthur Schaper
|
Posted: Aug 14, 2017 12:01 AM
Share   Tweet
The opinions expressed by columnists are their own and do not necessarily represent the views of Townhall.com. 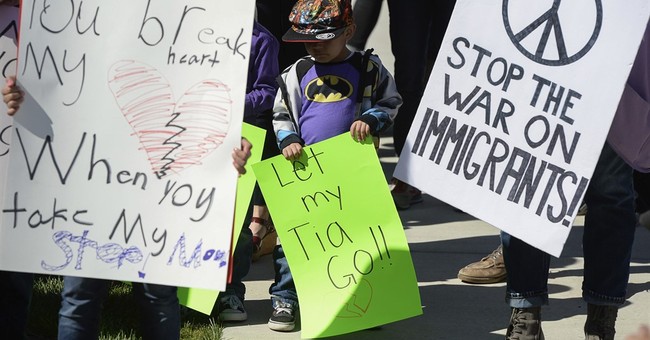 When I was training to be a teacher, my mentors taught me to be tough at the outset. I learned that to be lenient, to go by compassion rather than consistency, hurts everyone. No one learns anything. The rule of law makes learning, producing, and succeeding possible.

This lesson on learning and discipline illustrates the fundamental good that follows from our President enforcing our nation’s immigration laws. It is not compassionate to Americans or immigrants to allow illegal aliens to ignore our laws. The corruption rampant in Los Angeles County and throughout other major urban areas follows from the arbitrary disregard for our nation’s legal sovereignty and cultural integrity.

The liberal, marginalized national media still wants to push an illegal alien sob story narrative at all costs. Look over the list below of the latest sob stories the national readership endured over the past week (and month):

Stay, Hide or Leave? Hard Choices for Immigrants in the Heartland

Not one of these headlines admit that those “immigrants” are actually illegal aliens. Like their rabid anti-Trump hatred, the liberal media is obsessively pushing a rigorous pro-amnesty narrative. They want everyone to believe: “Oh, the poor illegals! They haven’t done anything wrong! They’re just humble people doing their best.” Of course, the article about the California pastor did mention that he used multiple false identities to avoid capture and deportation.

Why is the media driven to bully Americans with this “illegal alien good; immigration enforcement bad” narrative? I get to read one sob story after another about immigrants who face deportation and have to struggle with difficult choices. One would think that American newspapers would talk about Americans and the issues affecting them, right? It’s crystal clear that the media wants to depict lawbreakers as tragic victims, even though these illegals have themselves to blame. Yes, we are supposed to condemn the Trump Administration as hard, uncompromising, and unkind executive overreach.

But it’s not working. Last week Ann Coulter wrote an excellent article about Donald Trump's immigration reform proposal--The RAISE Act: enact a point system, lower legal immigration, and put American workers first. Coulter pointed out that the media doesn't want to talk about the RAISE Act because they would have to connect why so many societal ills have exploded in this country: the rising suicide rate among working-class Americans, the raging opioid crisis throughout the country, as well as rising crime rates.

And yet I feel that Ann Coulter still didn't get to the real reasons why. Why is it that The Washington Post, The New York Times, The Los Angeles Times and other major or what used to be major media outlets are so obsessed with promoting the sob stories of illegal aliens who now realize that they can no longer live in the United States without authorization? Why are we reading these stories?

I submit that the Trump-phobic, amnesty-pandering media publish these stories for the following reasons.

1. The Masters of the Universe running the media are attached to a left-wing, globalist worldview. As large corporate interests, they depend on a larger state and a larger government, which explains their essential hostility to the Trump Administration. Let's not forget that Mexican billionaire Hugo Slim has a major stake in The New York Times.

2. The new generation of journalists have been taught to be propagandists for left-wing causes. They have no profound historical perspective nor knowledge base. They are not objective reporters of fact but subjective propagandists—and they have been applauded for doing so.

3. Corporate interests want cheap labor. Therefore they want amnesty, they fight for open borders, and they want a flooded labor market to drive down labor costs. And guess what? They are the major ad purchasers for liberal media outlets. If these news organs want to print, they need ad revenue, which means any story showing illegal immigration in its proper, negative light gets killed.

4. But what about the conservative media elites who fret over the plight of illegal aliens but ignore the crises of working Americans? The Boston Globe columnist Jeff Jacoby wrote the fifth article listed above. His argument rests on a premise comparing illegal aliens to red-heads. Having red hair is not a crime. Entering the United States illegally is a crime. Jacoby’s argument is one of the most specious illogical and offensive I have read—and from a conservative! Charles Krauthammer has also caved, advocating for legal status for illegal aliens in the US, but not citizenship.

I have to surmise two reasons: they accept the white guilt narrative that America owes The Third World something. Perhaps the same media corporate donors are pressuring these “conservative” columnists. Perhaps they believe that a hard stance on immigration will cause conservatism to wane and lose future elections. Yet Donald Trump ran against that RNC Autopsy report in 2016 and won handily. Also, these columnists are white collar intelligentsia, and they do not experience the consequences of illegal immigration as the rest of us do.

Enough with the sob stories. If you break our laws, you pay the price. We have one rule of law, which must stand firm in the United States--and is the reason why so many seek our shores. We are a wonderful country where life, liberty, and the pursuit of happiness are ample and available. Why? Because we are a nation of laws. President Trump's immigration policy is tough but fair; consistent and yet truly compassionate. Americans have a right to discourage any immigration policy which is partial, arbitrary, based on misplaced, fraudulent compassion.