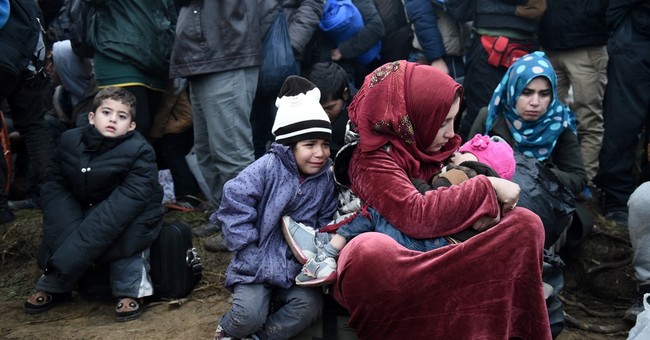 At the base of Statue of Liberty, and the basis for American Immigration policy, the following quote from Emma Lazarus speaks forth:

“Give me your tired, your poor,
Your huddled masses yearning to breathe free,
The wretched refuse of your teeming shore.
Send these, the homeless, tempest-tossed, to me:
I lift my lamp beside the golden door.”

If anyone wants to come to the United States, they enter under the condition that they respect key expectation of our nation and political culture: respect for our laws, and incorporation of our heartbeat for liberty. “The huddled masses yearning to breathe free” is one key phrase which one group of migrants seems less inclined to agree with. Regardless of one’s personal affections or affiliations, Islam as a religion, and Sharia law in connection with Islam, is not about liberty. Submission, oppression, and repression of any healthy dissent are defining characteristics. Inclined to disagree with me? Congresswoman Maxine Waters (D-Torrance) might be one of them, since she praised Sharia law as consistent with the United States Constitution. Really? With references to bodily mutilation for infractions of law, as well as abusive second class status for women and marked limited on free speech, clearly Sharia is incompatible with our Constitution, or with liberty.

For this reason alone, I am resistant to bring in “Syrian” refugees. That word “Syrian” requires quotes, since the Federal Bureau of Investigation has already admitted a number of times “We cannot screen these refugees.” Security concerns have only grown in the wake of the Middle Eastern refugee crisis, including eight Syrian terrorists caught along the Texas border.

This attempted invasion alone is grounds for refusing the refugees. More than half the nation’s governors (almost all Republicans) agree. More Republican candidates in general, and conservatives in California like Rafael Dagnasses running for Congress in Ventura County are emphasizing the national security concerns associated with the rising migratory stressors on the United States.

Yet not just Islamic terrorists, but Islam in itself stokes concerns about these refugees. This is not coming from me only. Rachelle Mand of Torrance, CA, a renowned expert on Islam and its nefarious political currents, first opened my eyes to the destruction nature of this political movement. From her, I listened to the otherwise offensive liberal atheist Bill Maher spell our some startling realities about the Muslim ideology. In an unprecedented yet refreshing interview with Charlie Rose, Maher slammed the political elitist naivete about Islam. Breitbart Editor’s Ben Shapiro released a telling video about the majority beliefs of Muslims throughout the world. The results are striking, and disturbing.

Intellectuals, political leaders, and even former Muslims are exposing some dark realities about Islam: it has a serious set of problems. A predilection for violence, a disarming inequity towards women, and even a latent culture which permits abuse of children and outright of non-Muslims, Islam by the book is by-and-large not fit for full consumption in a free society.

This problem brings us to the refugee “crisis” throughout the world, as Arabs fleeing the Middle East supposedly seek sanctuary in Western countries, particularly Europe and the United States. Should these countries accept these refugees?

A number of arguments have emerged, from talk radio to cultural critics, and the residents by and large: refuse the refugees! Besides the radical nature of militant Muslims (witness the Charlie Hebdo attacks in January and the suicide bombings last week in Paris), the more general argument advances this question: why are the other Arab countries in the region not taking in the refugees?

It’s not as though Saudi Arabia, Jordan, or even Egypt can’t take in these huddled masses. Consider Saudi Arabia. The nation has one hundred thousand empty, air conditioned tents. Yet this country cannot spare any space or the hundreds of thousands of fleeing Arabs from the surrounding areas? The Saudis took in the Arab dictators fleeing native-grown political revolts during the Arab Spring, did they not?

What about Jordan? One of the few remaining moderate states in the Middle East (besides Israel), Jordan is taking in some, but not many, while struggling with the increasing tensions brought on by political turmoil, internecine civil wars, and outright Islamic terrorism.

What about Egypt? The International Business Times reports the “dire conditions” of migrants who cannot thrive in the largest Muslim country in the Arab World, who see Europe as their only hope for a better life.

Now, instead of placing all the problems at the foot of Europe and America, it’s time for Arabs around the world to adopt liberal traditions in Jeffersonian Democracy. President George W. Bush, US Senator Dianne Feinstein, and former refusnik Natan Sharansky identified the necessity of establishing a culture based in political liberty and equal rights for all. The Bush Adminisration’s military successes in Iraq positioned Western influence to embolden and expand Western political liberty in the region.

Now more than ever, free countries must invest not in opening their borders, but rather opening the minds and hearts of oppressed people to demand the rules of law, religious liberty, and freedom from tyranny in their own lands. As California Republican gubernatorial candidate declared in his one 2014 debate against Jerry Brown, “The answer to the world’s problems is not an open border.”

This reform begins with facing the inherent conflicts in the dominant religion in the region: Islam. Once again, I am not some aloof Western advocate demanding that the rest of the world shift to my point of view. The current military dictator of Egypt, who has restored peace to that troubled nation, has demanded from scholars a much needed reformation of Islam. More former Muslims, who have fled the repression of the sect, demand its end. One country has already banned Islam within its borders.

The massive political, cultural, and religious upheavals in the Middle East cannot be eased with more immigration to First World nations. Not only should we refuse the refugees, but the Arab world must refuse the ideologies breeding the corruption and destruction in their countries.